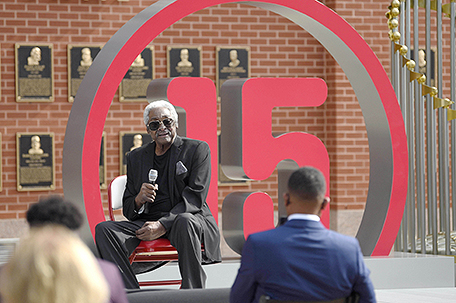 ABOVE PHOTO: Former Philadelphia Phillies player Dick Allen speaks after the unveiling of his retired number prior to a baseball game between the Phillies and the Washington Nationals, Thursday, Sept. 3, 2020, in Philadelphia.  (AP Photo/Derik Hamilton)

Now that the Philadelphia Phillies have added Dick Allen to the team’s Ring of Honor, could Cooperstown adding him to the storied Baseball Hall of Fame be far behind?

Even though he was knocking the ball out of the old Connie Mack Stadium in North Philadelphia and cementing his reputation as a baseball superstar, Dick Allen’s first stint with the Philadelphia Phillies (1964-1969) was no crystal stair.

As the Phillies’ first Black superstar, Allen was often booed and jeered by white Phillies fans, who would shower him with batteries and other objects while calling him the N-word and other racial slurs. Allen also had people throw rocks at his home.

“It wasn’t just at the ballpark,” said Phillies Managing Partner John Middletown. “It wasn’t just 50,000 people at Connie Mack Stadium. He lived with this. You can’t imagine what he went through. It was horrific.”

To many Black baseball fans living in Philadelphia in those days, the hostility to Allen along with the hatred that Jackie Robinson received on his first trip to Philly were the main reasons why they refused to root for the Phillies.

“It ranks at top, the very top,” Allen said about having his jersey retired. “Nothing pleases me more and can you imagine what it would do for my mother and for the rest of my whole family.”

Middleton said he wanted to honor Allen because of what he did on the field for the Phillies, especially in the midst of the hostility both on and off the field that he faced during the first five years of his career.

“I talked about how much Dick could have been had he played in a better time and a better environment,” Middleton said. “To me, it makes Dick’s extraordinary achievements even more special when you consider the circumstances and conditions under which he had to live and perform.”

Despite having the numbers — a .292 lifetime batting average, .378 on-base percentage and a .534 slugging percentage — as well as being named the National League’s Rookie of the Year award in 1964 and the league’s Most Valuable Player in 1972, Allen was often perceived by baseball writers as a malcontent and an uppity n—r.

And let’s be honest. The baseball writers determine who gets into the Hall of Fame.

Allen’s longtime friend and advocate Mark Carfagno, who was a guest on my radio on WURD on Aug. 15, said he is hopeful that the retirement of Allen’s jersey will eventually lead him to Cooperstown.  Teams don’t usually retire the numbers of great players unless they are already in the Hall of Fame.

“It sends a message to the Hall of Fame that the team right now. ‘Look what we did’ made an exception to the (Phillies) policy,” Carfagno said. “We think he’s a Hall of Famer. He was a pioneer being the first African-African baseball superstar in Philadelphia. He always stood up to his rights. To me, that’s a hero.”

I think that Carfagno is right.  Like Jackie Robinson, Allen had to play well under the ugliest of circumstances as a baseball player.  One could argue that what Allen through was a bit more traumatic than Robinson’s experience in Philadelphia because he was getting hostility from the fans who were supposed to be rooting for him.

It didn’t help that in 1965 that Allen got into a fight with teammate Frank Thomas who was seen as the martyr in the incident. That incident soured white fans on Allen for the rest of his time in Philadelphia.

And then there was the incident in 1969 when he went out to Monmouth Park in New Jersey, but got caught in traffic and was late for a twilight doubleheader and was suspended indefinitely by the Phillies.

Years later, Allen told me that thing that bothered him about the incident is that the team wasn’t concerned about his well-being. He was eventually traded to the St. Louis Cardinals for Curt Flood, who never showed up to play for the Phillies.

Over the years, Allen’s animosity has dissipated over the year. One of the things that warmed his heart and helped to heal was to see African-American superstars like Ryan Howard and Jimmy Rollins being embraced by the city in the way that he wasn’t.

In the final analysis, Allen is way overdue for induction into the Hall-of-Fame. I hope he gets the flowers of Cooperstown while he is still on the earth.