From bye to fly? 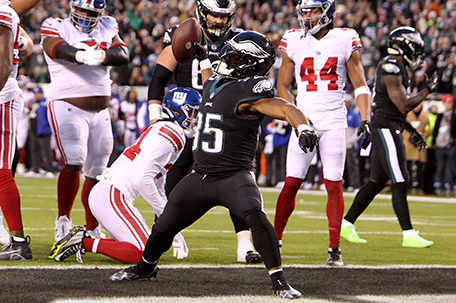 ABOVE PHOTO BY: Webster Riddick

During their hot 13-1 start, the Philadelphia Eagles (14-3) were arguably the NFL’s most unstoppable team. They not only beat teams, but they also dominated them on both sides of the football.

With the division rival New York Giants invading Lincoln Financial Field on Saturday night for a Divisional playoff matchup, the Eagles are hoping that the rest from the bye week will help them return to the high level they were playing on in their Week 14 game against the Giants at MetLife Stadium, a game the Birds won 48-22.

One of the advantages of the bye week for the Eagles is that quarterback Jalen Hurts was able to rest the shoulder he injured in the game against the Chicago Bears back in December. Eagles head coach Nick Sirianni said his signal caller is in much better shape than he was in the Eagles’ New Year’s Day victory over the Giants to end the season.

“[Hurts is] better today than he was two weeks ago,” he said. “He’s continuing to get better, and he feels good.”

During the bye week, Hurts said playing with injury is something that he’s had to do throughout his football career at both the pro and collegiate level.

“I’ve been able to navigate that, and I’ve had no problem with doing it,” Hurts said. “That’s [a] thing I have to get my mind right to do.  … At the end of the day when you want something done you have to do what you have to do.”

During his press conference with reporters on Tuesday in preparation for Saturday’s game, Hurts said he is expecting the Giants to come after him and his injured shoulder.

“It’s football. I got a bounty on me every week I go out there on the field, so I’m going to go out there and play my game and whatever happens, happens,” Hurts said. “The quarterback gets a lot of attention. I think every quarterback has a bounty to stop them.”

Despite still healing from his injuries, Hurts was still grinding. He showed up at the Eagles NovaCare facility the day after the win over the Giants even though Sirianni had given the rest of the team the day off. Hurts made it clear to reporters that he was leaving no stone unturned for this current Eagles postseason run.

“I told (Sirianni) that we had business to attend to,” Hurts said. “We have an opportunity of a lifetime…  There’s so much we have to be thankful and grateful for with the opportunity that we have. Why not give it your all while you can…  I want to give the game everything that I have.”

Another player coming back from injury on the offensive side of the football is right tackle Lane Johnson, who had limited participation on Tuesday and is expected to start on Saturday.

The Eagles will need all hands-on deck against a Giants defense that ranks 5th in the NFL in allowing third-down conversions and in red zone defense. When the two teams met on Jan. 8, the Giants sacked Hurts three times.

“I think anytime you’re playing a team multiple times a year, they obviously get a taste for what we do and our answers to things they bring,” said Eagles Landon Dickerson. “It goes back and forth. Obviously, they figure out what we do we do in certain situations. They’re going to bring counter to that …They change things up in the second game and they’ll change things in this game.”

Meanwhile, the Eagles defense is looking to duplicate its outstanding performance from the regular season where they recorded a league-leading 68 sacks. The Birds had three players in double figures in sacks. The Birds were fourth in the league in the takeaway-giveaway ratio.

But they are going up against a Giants offense with a hot Saquon Barkley and Daniel Jones. In last week’s NFC Wildcard game against the Minnesota Vikings, the Giants rolled up 431 yards of total offense-including 142 yards rushing.

Eagles’ defensive coordinator Jonathan Gannon said the Eagles defense, which held Barkley to just 28 yards on nine carries in their week 14 matchup at MetLife Stadium, has to do an even better job to contain him Saturday night.

“We understand he’s going to make some plays because he’s a really unique player, and he’s a really good player,” Gannon said. “We have to do a good job. It’s not one or two guys, it’s all 11 guys being on the same page doing their job at a high level to be able to hold a player of that caliber down to where we need it to be to win the game.”

The most eye-opening performance in that game came from Jones who passed for 301 yards and two touchdowns and ran for 78 yards. To slow the Giants, Brandon Graham said the Eagles defense has to get back to that team that was No. 1 in the NFL against the pass and No. 2 in yardage allowed.

“(Giants) coaches put (Jones) in good spots, and he executed at a high level,” Gannon said. “They’re a good football team. They’re playing at a high level, and the offense, they do some unique things because of the quarterback skill set. It makes it hard for defenses to defend.”

If the Eagles want to advance to the next round, they can’t let Barkley or Jones get into any kind of rhythm.

If you want to see if they pull it off, you can catch the Eagles and the Giants in the NFC Divisional Game race on Fox-29 at 8:15pm.