From basketball to the streets: A young man makes clothes to “protect our brothers” 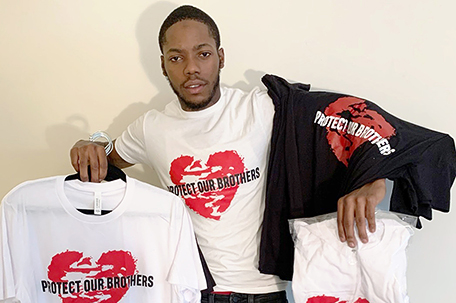 ABOVE PHOTO: 23-year-old Tymair Johnson showing off some of his clothing.

Johnson’s friend, Aamir Johnson-Daye — better known as D4M Skiano — was a local rapper who made music in the neighborhood. The 18-year-old aspiring rapper was shot to death at 10:55PM on the 1400 block of North 61st Street last summer on July 5. Johnson will never forget that day. The city had seen the largest number of shootings since 2013. To date, authorities have given no motive for the shooting and no arrests have been made.

His friend’s death gave Johnson a wake-up call and left him to struggle with the sudden loss of a young man described as a talented music artist and a person full of promise.

The death motivated Johnson to start up his own clothing line to promote the message bringing awareness to gun violence and “Black-on-Black” crime.

“Black on Black” crime is a phrase not only used by white people, but also by Black people calling out crime in our communities,” said 23-year-old Johnson. “People cannot stress about Black Lives Matter if they are not protecting their own folks. This is why we are starting this brand — to show others that we should protect our men. We are losing too many of our fathers, brothers, sons and too many other men. I’m so disgusted. I’m also using this clothing line to show others [there’s] more to life than Black violence and violence in general.”

So far, he has gotten off to a great start. Recently, the former Mathematics, Civics and Sciences Charter School basketball player searched around West Philadelphia a private warehouse for his clothing line. In less than a month, he has already expanded his business

Inside his warehouse, Johnson makes shirts, hats, face masks, hoodies and summer jackets for people of all ages.  “Protect Our Brothers” is printed on all his clothing.  He is excited about his clothing line and wants to expand his operation across the world.

“I plan to reach out to pro athletes and anybody who has a big platform,” Johnson said. “I want to work with those people and help spread my message about stopping gun violence. Today, we must protect our brothers. We also must protect our sisters. I have a family of sisters and they want to help me stop this madness.  I think that’s really great. There have been a lot of women losing their lives to gun violence. They have been losing their lives for nothing.”

When the COVID-19 pandemic hit last spring and confined millions of people to their homes, Johnson was busy helping his younger sister, Destiney McPhaul, with her basketball skills. This year, his sister played basketball in her senior year at West Catholic High. A couple months ago, McPhaul helped the West Catholic Lady Burrs win a state championship. It brought tears to Johnson’s eyes to see her accomplish so much after years of hard work. Now, McPhaul is helping him to promote his clothing line. She does it by reaching out to many other high school basketball players.

“Destiney is just being herself helping me with the clothing line,” Johnson said. “She shows young men and young ladies that you can be great doing what you want to do. She shows them you can be successful on the basketball court. She promotes that by talking to them about my clothing line. She encourages them to support my clothing and buying the products.”

Johnson believes his clothing line fits perfectly with basketball. Recently, he saw on Twitter that Los Angeles Lakers guard Lebron James had posted a message about gun violence that said; “Protect our Young Black Women & Men!” When Johnson saw what James had posted, he got very excited.

One of the most important things that Johnson wants to do with his clothing line is to establish a citywide development class for underage brothers who need help with their education and help obtaining employment. Johnson feels this will help stop so much crime in the city.

“That’s why I’m so much against crime,” he said. “That’s why we have to fight harder to stop Black-on-Black crime. That’s why I’m trying hard to keep our Black men protected.”

Those who want to learn more about  Johnson’s clothing line can contact him via email at: [email protected].