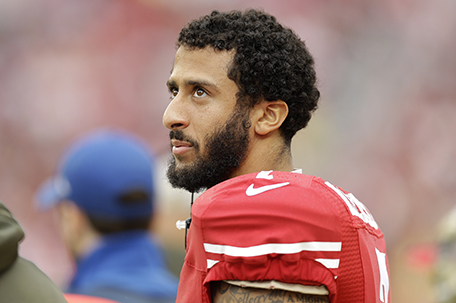 San Francisco 49ers Quarterback Colin Kaepernick is the latest Black athlete to learn that to certain sports fans, he lost his First Amendment rights when he picked up a football.

When San Francisco 49ers quarterback Colin Kaepernick refused to stand for the national anthem during the Niners preseason game against the Green Bay Packers, he was harshly criticized on social media, especially Twitter, for being unpatriotic.

Even worse, Kaepernick’s Twitter mentions were filled with the kind of invective that always seems to come up when a Black athlete dares to speak out on a social issue involving the African American community such as the N-word, “go back to Africa,” or my personal favorite, “shut up and play…”

Some of the visceral hatred such as the videotaped burning of Kaepernick’s jersey, kind of made his point regarding the racism that still exists in America and why people tend to lose their minds when anyone, especially millionaire athletes like himself, speaks out against it.

When African American athletes dare to show solidarity with groups like Black Lives Matter, they’re often criticized for their participation because it is seen as being ungrateful. “You’re making more than I’ll ever see at my factory job by playing a game. How dare you talk about racism, police brutality and inequality?!”they say.

Now the fallacy in this line of thinking is that it overlooks the fact that Kaepernick, like other Black athletes, have friends and relatives who look like Eric Garner and Tamir Rice and know that something could happen to them or their children at the hands of police. They know that doesn’t insulate you from racism.

It’s something that Dr. Martin Luther King Jr. pointed out in his famous, “Letter from a Birmingham Jail”:

“Moreover, I am cognizant of the interrelatedness of all communities and states. I cannot sit idly by in Atlanta and not be concerned about what happens in Birmingham. Injustice anywhere is a threat to justice everywhere. We are caught in an inescapable network of mutuality, tied in a single garment of destiny. Whatever affects one directly affects all indirectly.”

When you go back to listen or read what Kaepernick was saying, it definitely runs counter to the charges of being unpatriotic and un-American.  If anything, Kaepernick’s refusal to stand during the national anthem is in keeping with the principles of freedom and justice outlined in the Constitution.

“I have family, I have friends that have gone and fought for this country.” Kaepernick said. “And they fight for freedom, they fight for the people, they fight for liberty and justice, for everyone. That’s not happening. People are dying in vain because this country isn’t holding their end of the bargain up, as far as giving freedom and justice, liberty to everybody. That’s something that’s not happening. I’ve seen videos, I’ve seen circumstances where men and women that have been in the military have come back and been treated unjustly by the country they fought have for, and have been murdered by the country they fought for, on our land. That’s not right,” he concluded.

What’s un-American about that? Seems like it’s in keeping with the Founding Fathers and how they felt about tyranny and oppression to me.

In fact, the Declaration of Independence says: “Governments are instituted among Men, deriving their just powers from the consent of the governed, –That whenever any Form of Government becomes destructive of these ends, it is the Right of the People to alter or to abolish it.”

Being critical of your government doesn’t make you un-American. The ability to dissent is perhaps the most American thing you can do. Kaepernick, like others before him, wants his country to live up to the promise of justice for all.

The backlash Kaepernick has received from White fans using racial slurs further illustrates the idea that Black athletes in particular, and Black men in general are to be seen and not heard, especially when they strike at the heart of White privilege.

While White gun rights advocates are seen as patriotic when they brandish their pistols and assault rifles in the name of standing up for the right to bear arms; Black men, especially athletes, are seen as ingrates when they challenge police brutality and the all- too American tradition of systemic racism in America.

If nothing else, the hateful messages on Kaepernick’s Twitter feed are proof positive that the phrase “the land of the free and the home of the brave” only applies to certain people.

It appears that Black athletes like Colin Kaepernick aren’t included in that group.