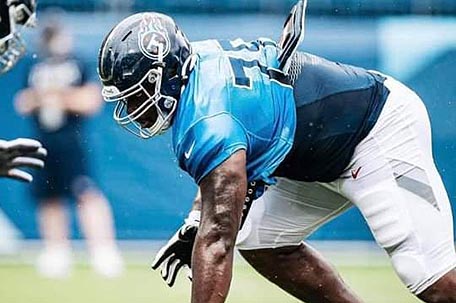 At West Philadelphia High School, varsity football coach Frank Steed runs the school’s football program with an iron fist. For those players who buy into his system, people noticed that it all comes from an enormous heart and passion to help those students become better football players and respectable young athletes.

During his time at West Philadelphia High, former two-way football standout Teair Tart became one of those players who valued the lessons Steed and the team’s coaching staff taught him.

Tart was a 2014 First Team All-Public and Second Team Philadelphia Daily News All-City selection for the West Philadelphia Speedboys. He led the Speedboys to their first-ever PIAA 3A title.  Tart played on the school’s basketball team before he switched up and started playing football, and it was the smartest decision that he ever made as a high school athlete.

Due to the fact that Tart took Coach Steed’s words seriously, he is now a front runner to become a starter in the NFL for the Tennessee Titans. This season, Tart is playing his second season for the Titans. Before he was picked up as an undrafted prospect from Florida International, he had offers to play college football from Alabama, Arkansas, Kentucky, Ohio State, Mississippi State, South Carolina and Temple among others.

Last year in his rookie season, the 6-3, 290-pound nose tackle appeared in seven games and had one start in 2020. He had 12 big tackles for the Titans.

Last season, Tart was suspended for one game by the NFL for unnecessary roughness and unsportsmanlike conduct. In a game against the Cleveland Browns, he was caught stepping on the leg of Cleveland guard Wyatt Teller. The officials ruled it as a personal foul. Tart was ejected from the game with 8:25 left in the second quarter. He served a one-game suspension and returned to the team the following week.

During his journey to the NFL, the biggest obstacle for Tart has been his personal struggle with himself. Since graduating from West Philadelphia High, the hard-working nose tackle has been pushing hard to improve his game. He has kept himself motivated, and has stayed focused. Tart has never allowed himself to give up on his NFL dream. He always wanted to play in the NFL, and did everything in his power to make his dream a reality. Now he’s playing a backup role and expected to get more playing time.

Today, Tart’s play on the football field appears to have solidified his place as the frontrunner to be Tennessee’s starting defensive back. The position has become more available after veteran defensive back DeQuan Jones left the team due to free agency. Playing alongside newly acquired Jeffery Simmons and free agent acquisition Denico Autry can only help his progress to become a NFL starter.

Like the entire 2020 rookie class, Tart enjoyed an offseason program that really paid off. He worked with strength and conditioning coaches and added more muscle in his routines. He improved his cardio by eating lots of chicken and salmon and by cutting out fried foods. As a rookie, Tart has enjoyed learning all the tricks of the trade. And now, this season, he is ready to flex his muscles and show Tennessee fans what he can do.

Going into this Sunday’s road game against the AFC South division rivals (0-4) Jacksonville Jaguars, the (2-2) Tennessee Titans hope to stay in first place. Last Sunday, Tennessee lost a tough road game against the New York Jets in overtime. Tennessee kicker Randy Bullock missed a 49-yard field goal attempt in the final minutes of overtime that gave the Jets a 27-24 victory.

In the overtime period, Tart did help out on defense. He played several snaps and helped make several big tackles to stop the Jets from scoring a touchdown. In this Sunday’s game against the Jaguars, Teair Tart could see more action.

After last Sunday’s football game, Tart caught up with his father, Gary Spencer, in the team’s parking lot. He hugged Spencer and greeted several other people who wanted his autograph. Former West Philadelphia High basketball legend Joe Garrett traveled with Tart’s father to the game. Garrett wanted to meet the Tennessee nose guard. They both took pictures together in front of the Tennessee team bus.

“Teair has come a long way, and if it wasn’t for our coaching staff at West Philadelphia High talking him into playing football, we wouldn’t know how his athletic career would have turned out,” Goings said. “He played a great game in the Philadelphia All-Public All-Star game. He played like a beast. He was named the game’s Most Valuable Player. We never imagined Teair would become a NFL player, but he always had the potential to become one. We never thought it would be that easy for him. But he worked hard for everything. That was the key to him making it to the NFL.”