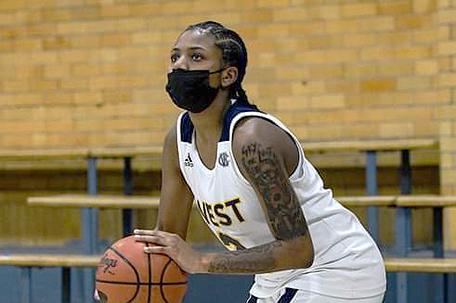 ABOVE PHOTO: Destiney McPhaul while she played for West Catholic High School.

Destiney McPhaul has become such a talented basketball player. Three years ago, according to ESPN.com, McPhaul was ranked as the 25th best female guard in the nation. When playing in high school, McPhaul was described as an athletic point guard who could do many great things on the basketball court. ESPN.com also lauded McPhaul’s combo ability and as a quick leaper who can rebound the ball, find the rim with great quickness and score points with great force.

Three years ago, ESPN.com was correct regarding everything they said about the talented 6-1 shooting guard. Since then, McPhaul graduated from West Catholic High and attended Virginia Tech, but things didn’t work out in her favor there. She made the decision to come back home to Philadelphia last August, and is now about to begin her college basketball career at Temple University.

McPhaul had every intention of staying at Virginia Tech, but she found out the school wasn’t a good fit for her. She wanted to be a starter on the team, and Virginia Tech didn’t promise her that. However, Temple women’s basketball coach Tonya Cardoza welcomed McPhaul with open arms.

“That’s who she is,” Cardoza said at a recent press conference. “She wants the ball in her hands and to be on the floor. That says a lot about Destiney and I can’t wait for her to be those moments here at Temple University.”

While Temple has filed a waiver for McPhaul to immediately be eligible to play, she will most likely redshirt for a year and still have four years left to play at Temple University. Right now, Cardoza is more than happy to wait a year.

“Her talent is unmatched,” Cardoza said. “The fact that she won on her high school team and played great in the state championship game means a lot. For her to come back home says a lot. Hopefully with her impact, other local players will follow.”

Once McPhaul starts playing basketball for the Temple Lady Owls, there will be plenty of excitement at the Liacouras Center. The talented guard is looking forward to bringing excitement to the crowd.

“Having all the pressure on myself and my team is what I like,” she said. “As a player, you want to play in big games and win championships on the court. You want to play in those moments. I’m a big-time player. I play great when I’m in games that really matter.”

“It feels great to win the Philadelphia Catholic League championship,” said McPhaul, who spoke with reporters after the game. “A lot of people didn’t expect us to win the Philadelphia Catholic League title. You could see people stop sharing the love when we were on that losing streak. We felt a lot of people were jumping ship on us. It was mainly people who didn’t believe in us. During that time, everything was going downhill. But we kept on fighting. We never gave up. Once we started winning again, we opened people’s eyes. For our team, our hard work finally paid off. All those losses taught us a valuable lesson.

It will be a matter of time before Destiney McPhaul hits the court. Once that happens, Coach Cardoza will have the responsibility of putting more talented players on the team. If she follows the same blueprint of former West Catholic High girls basketball coach Beulah Osueke, the Temple women’s basketball team should become a championship contender in college basketball. At this point in her college basketball career, McPhaul expects nothing less.