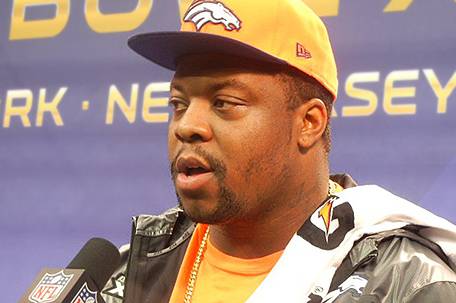 JERSEY CITY, N.J. –Former Temple star and Denver Broncos defensive tackle Terrance “Pot Roast” Knighton has spent a year in unfamiliar territory and it’s not because he was playing with a team in a new city.

In his fifth year in the pros since playing his college ball in North Philadelphia, Knighton is experiencing what it’s like to be on a winning team after playing for losing teams at the collegiate level and for the first four years of his NFL career.

Playing for a Denver Broncos team that is gearing up for it’s Super Bowl XLVIII matchup against the Seattle Seahawks this Sunday at MetLife Stadium, Knighton has enjoyed the season and is relishing the opportunity to play for a championship.

“You dream about it, you pray on it, you hope it happens,” Knighton said. “I’m just glad take advantage of the moment.  … It was frustrating (playing for losing teams), but looking back on it now, it makes me cherish this moment even more. Adversity builds character. A lot of time people forget about the downs. But I remember it at times like this.”

This season, Knighton has made the difference in the middle of the Broncos defense. He has 31 tackles, three sacks, five tackles for a loss, seven quarterback hits and one interception. In the AFC Championship game against the New England Patriots, Knighton had four tackles, including two for a loss and a sack of Patriots QB Tom Brady.

“We are very excited to have him. He has been a real stalwart up front, especially inside in both the run and the pass. We are pleased in the growth and development he made this year, but I attribute it to him,” said Broncos head coach John Fox.

Broncos defensive coordinator Jack Del Rio said Knighton really increased the level of his play when several Denver defensive lineman went to down to injury.  He was called upon to not just improve his own game, but to also be a leader of the defense.

“Basically it became, ‘Look we really need you to step up and not just play well. We need you to step up and lead, help Sly (Sylvester Willliams) be comfortable next to you, talk with him,” Del Rio said.  “He’s really taken that and run with it. He’s really embraced the role. He’s played well and he’s done more things behind the scenes aside from playing well, in terms of leadership and helping Sly, the young D-tackle playing next to him, play at a better level.”

At 6-foot-3, 335 pounds, Knighton has become popular with his Denver teammates who affectionately call him, “Pot Roast.”  He said the name came when he ordered pot roast on a six-hour flight back to Denver.

“[The] Plane is dark and the lady is walking down the aisle saying, ‘Pot roast, pot roast’, and I’m like, ‘Right here, right here’. My teammate behind me was like, ‘You’re saying that like that’s your name. I’m going to call you ‘Pot Roast,’’ Knighton said.  “And then it stuck with me. It was either that or ‘shrimp Alfred,’ so I’m glad I got that.”

Coming into their Super Bowl matchup with Seattle, Knighton will be among the players on the defensive line expected to slow down Seahawks running back Marshawn Lynch, who gained 1,257 yards rushing and scored 12 touchdowns.

Oddly enough, some observers are billing this matchup as “Pot Roast versus Skittles.”

In three seasons as a starter with the Owls, Knighton accumulated 184 tackles (105 solo), seven sacks and 26 tackles for a loss, three forced fumbles, six fumble recoveries and four blocked kicks. He said playing at Temple made him mentally strong despite all the losing.

“You’re playing in the heart of North Philadelphia, it’s a rough area,” Knighton said. “You gotta be tough. That’s why we take pride in being Temple-made and being Temple tough with two Fs.”

Though Knighton said he was blessed to be a third-round pick by the Jacksonville Jaguars, he still experienced losing.   When he became an unrestricted free agent, Knighton said he couldn’t pass up the opportunity to finally play for a winner.

“You can’t pass up playing for a Super Bowl contender,” Knighton said. “Playing next to a (linebacker) Von Miller, Champ Bailey behind you, Wesley Woodyard, you can’t pass up on things like that. I had the opportunity to play here and I jumped on it.”