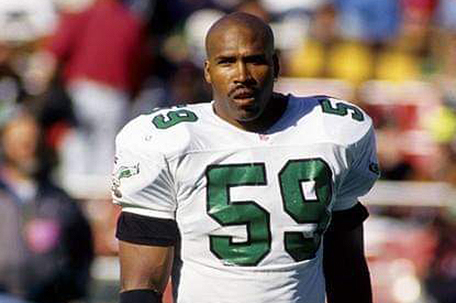 Former Philadelphia Eagles linebacker Seth Joyner played eight seasons in Philadelphia. He’s the only Eagles player to record at least 35 sacks and 15 interceptions in franchise history. He is also one of only two players in Eagles history to execute 20 or more forced fumbles for the Eagles football team.

Picked up as an eighth-round draft pick in 1986 by the Philadelphia Eagles, Joyner went on to lead Philadelphia to several NFC East Division titles as well as a great number of appearances in the NFL playoffs and became a three-time All-Pro selection. At 6-2 and 240 pounds, Joyner had a great build for a rushing linebacker, but his greatest weapon was his mental toughness on the football field.

While playing for the Philadelphia Eagles, Joyner was part of the defensive line with Jerome Brown, Reggie White, Byron Evans, Andre Waters and Clyde Simmons. Together, they became one of the most dangerous defensive lines in pro football.

Despite playing many great games in his NFL career, Joyner took the most pride playing against the Dallas Cowboys. In a game that took place on Thanksgiving Day 1989, a $2,000 bounty was placed on the head of Cowboys kicker Luis Zendejas, who had been traded by the Eagles earlier that week.

During an exclusive interview that took place a few months ago at the Philadelphia Sports Hall of Fame ceremony, Joyner set the record straight and told the real story about the nasty bounty that took place on that Thanksgiving Day in Irving, Texas at Dallas Stadium.

“Buddy Ryan didn’t orchestrate the bounty, we did that,” Joyner said. “We had released Luis Zendejas and Dallas had released Roger Ruzek that same week. What we did was trade kickers. Well, Luis Zendejas went down to Dallas and started telling family secrets on the Eagles. He told secrets not only to the Dallas football team, but also to the media in Dallas. Some of our guys didn’t like what he did. We were very angry about that. That’s how the bounty got started. It didn’t have anything to do with Buddy Ryan putting a bounty hunt on anybody.”

“That was something that the Eagles players did themselves,” he continued. “Buddy had nothing to do with that. The media tried to make it into that. When Luis Zendejas pulled his stunt, he wasn’t out of Philadelphia for 72 hours when he started running his mouth. We were angry that Luis Zendejas went down to Dallas and ran his mouth. There was no way we weren’t going to allow that to happen. So, for running his mouth Luis Zendejas had to pay a price for it.”

With the Dallas Cowboys down 10-0, the Philadelphia Eagles were set to start the second half. During the kickoff, Eagles rookie linebacker Jessie Small sprinted past three Dallas Cowboys players and he delivered a monster hit on Zendejas, who was knocked to the turf as the Dallas kicker got decked in the middle of the field.

After Zendejas got hit, the Dallas kicker staggered towards the Eagles’ bench to voice his anger. Before he got to the bench, Zendejas crumpled on the field. He sat on the turf and tried to shake out the cobwebs. While this was going on, Cowboys head coach Jimmy Johnson came running on the field with smoke shooting from his ears. Coach Johnson pleaded with the referees to have Jessie Small ejected from the game. However, a penalty was slapped on Small, and a stiff fine was later issued by the National Football League.

Trouble first started early in the first half when the Philadelphia Eagles had roughed up Dallas Cowboys quarterback Troy Aikman in the end zone. Eagles linebacker Brent Hager had knocked Aikman on the ground well after the play was whistled dead. Despite the play being whistled dead, Eagles defensive tackle Mike Pitts turned around and punched Dallas guard Kevin Gogan in the head. The punch caused Pitts to be ejected from the game.

As Pitts was leaving the Eagles’ bench and heading towards the team’s locker room, the late CBS color commentator John Madden noted that he had smelled more trouble in this game.

“I will tell you what, this game has started off with some real high intensity,” he said..

For the nasty hit on Troy Aikman, there were reports that the Philadelphia Eagles had a $500 bounty put on the Dallas Cowboys quarterback. Despite the hit, Joyner gave no reason for the bounty hunt against the Dallas Cowboys quarterback. Once the game was over, Coach Johnson complained about the Eagles’ 27-0 victory and pointed the blame at Ryan for starting the bounty.

“In reality, I never wanted to leave the Philadelphia Eagles,” Joyner said. “I would have loved to play all 13 of my years here. But there were a lot of things that went side-ways here. Keith Jackson had left the Eagles and Reggie White had gone to Green Bay. And Keith Byars went to the Miami Dolphins. It was just a matter of time before the team fell apart. Under the circumstances, by the time Coach Rich Kotite was fired and the team had hired new owner Jeffrey Lurie who bought the team. By that time, it was time for me to move on.”

In dramatic fashion, the (9-8) Eagles have made the NFC playoffs. With Green Bay eliminating the Minnesota Vikings, the Eagles will face the Tampa Bay Buccaneers in a wild card game that’s set for January 16 in Tampa Bay. The  game will air on Fox 29 at 1 p.m.