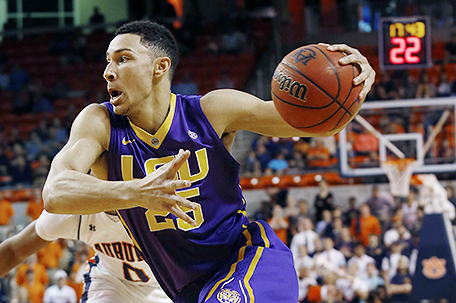 ABOVE PHOTO:  LSU’s Ben Simmons drives to the basket against Auburn in the first half of their NCAA college basketball game in Auburn, Ala. The projected top two picks of 2016’s NBA draft are both freshmen. But Simmons didn’t even get a sniff of March Madness. And Brandon Ingram of Duke didn’t make it past the Sweet 16.  (Todd J. Van Emst/Opelika-Auburn News via AP, File)

The Philadelphia 76ers won the NBA Draft Lottery and will get the number one pick. Now it’s time for them to stop talking about the “process” and start showing some progress.

After several years of tanking, the Philadelphia 76ers efforts at being really bad have finally yielded something really good.

On Tuesday night, the Sixers won the NBA Draft Lottery and got the number one pick in the 2016 NBA Draft. That means that either LSU’s Ben Simmons or Duke’s Brandon Ingram is going to hold up a white 76ers jersey after their names are called.

Add this to the other two picks the Sixers will have in the first round and you get a team that has the opportunity to get some exciting young players that have the potential to point a Sixers team that badly needs it in the right direction.

If you saw 76ers head coach Brett Brown during the NBA Lottery broadcast on ESPN, he was like a kid at Christmas when he saw his team logo in the No. 1 slot. He seemed like a guy who’s looking forward to coaching a team capable of winning more than 10 games.

“We’ve taken hits for three seasons,” Brown told ESPN. “We’re excited with the position that we’re now in. I love some of my current players. We think we can grow them. I’ve got a real belief in Joe Embiid and I have faith in Dario Saric. I’m thrilled for our city.”

We have to take a moment to acknowledge former General Manager Sam Hinkie and the “process” of serial tanking that brought the Sixers to this moment.

The last time the Sixers got the number one overall pick, it was 1996 and the team used it to draft Allen Iverson. Five years later, the 76ers became a perennial playoff team, made it to the NBA Finals in 2001, and Iverson went on to become a Hall of Famer. While nobody is expecting the Sixers to improve immediately, we’d like to be able to see some light at the end of the tunnel.

Shucks, I’m willing to accept five to 10 games below .500 as a show of progress.

The Sixers will also have a heckuva choice between Simmons and Ingram.

The 6-foot-10 Simmons averaged 19 points and 11 rebounds per game. He’s a good ball-handler for a big man, has point-guard-like court vision and averaged 4.8 assists per game. From what I’ve seen, he has an NBA body and reminds me of Magic Johnson with his ability to handle the ball for a big man. But in a game where the three-point shot has become king, his suspect jump shot might give the team pause.

At 6-foot-9, Ingram is a good scorer and can hit the outside shot. He was 41 percent from three-point range, but needs to work on being a ball-handler as a playmaking guard. He scored 17 points per game and pulled down six rebounds and averaged two assists per game.

And the team will also have to figure out how to work with what it already has…and what shape it’s actually in.

Speaking of the 7-2 Embiid, he was reportedly seen at the team’s practice facility at the Philadelphia College of Osteopathic Medicine working out in the gym, taking some shots and throwing down a few slam dunks.

Embiid is coming off of a couple of surgeries to repair his right foot, and can either be the player that he was projected to be coming out of Kansas and the big man the Sixers need to anchor the low post or the second coming of Greg Oden or Sam Bowie, both of whom had chronic foot or leg problems that stunted their careers. It’s anybody’s guess.

Meanwhile, the 6-9 Saric has let it be known that he is going to be leaving the Turkish team, Anadolu Efes, to play for the Sixers in the 2016-2017 season. He averaged 11 points and five rebounds per game. According to several scouting reports, Saric has become a better at hitting the three-pointer and is shooting 37 percent from behind the arc.

And don’t forget about young guys like Jahlil Okafor, who averaged 17.5 points per game last season, and Nerlens Noel, who averaged 11 points and eight rebounds per game and is a solid defensive presence.

The Sixers have a lot of pieces that could become an interesting puzzle when you add the three new first-round picks they’re going to get this year.

Whether the puzzle is going to look like a lush landscape or a haunted house will determine how many people come to the Wells Fargo Center to see them.