“Fly Eagles Fly…On The Road To…” 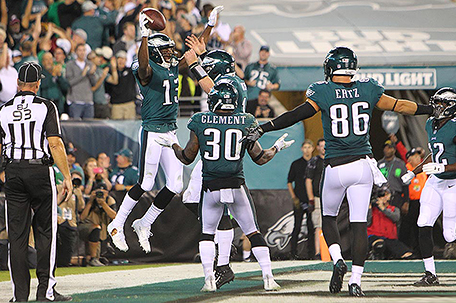 The Philadelphia Eagles are flying high at 6-1, but can they outrun their injuries?

With a 6-1 record, an emerging superstar of a quarterback and tenacious defense, the Philadelphia Eagles are the best team in the NFC right now.

As they approach Sunday’s game against the 0-5 San Francisco 49ers at Lincoln Financial Field, there’s no reason to believe that they won’t be 7-1 after the dust settles.

There’s a lot of good things to look forward in the second half of the season for Eagles fans.

But because the Injury Bug seems to have bitten this team in some pretty significant ways, there’s also some potential bumps on the road to victory.

Fans are obviously obviously happy about the offense second-year quarterback (and NFC Offensive Player of the Week) Carson Wentz is running. In the tradition of Eagles quarterbacks Randall Cunningham and Donovan McNabb, Wentz can beat you with both his legs and his arm. If he’s not doing that Houdini act that he did to prolong a fourth quarter drive of Monday Night’s game against the Washington Redskins, he’s hitting Alshon Jeffery, Mack Hollins, Nelson Agholor or Torrey Smith with the long bomb.

So far, you could argue that Wentz is having an MVP season for the Birds. He has passed 1,852 yards with a league-leading 17 touchdowns to only four interceptions. He’s also third in the NFL in passing yardage and fourth in the NFL in overall passing rating at 104.

“He understands the game plan,” Eagles Head Coach Doug Pederson said.  “He studies and prepares like I’ve never seen in a quarterback before.”

In the win over Washington, Wentz threw four touchdown passes and passed for 268 yards. He completed passes to eight different receivers during the course of the game. 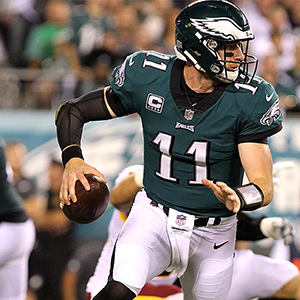 “Yeah, I just have a ton of confidence in our guys,” Wentz said. “That’s something that makes, I think, our offense goes.”

Wentz made a bunch of eye-opening plays including heaving a desperation nine-yard touchdown pass to running back Corey Clement after taking a hard hit from a Washington defender.

“He’s amazing,” Jeffery said. “On that touchdown to Corey, I’m like, I don’t know how he saw him. He must have Spiderman vision. He’s great. He does a great job just making plays and seeing guys.”

After Washington cut the lead to 24-17, the Eagles faced a third and eight from their own 27-yard line. Wentz went back to pass and looked like he was going to down as the Redskins five-man defensive crashed through a disintegrating passing pocket.

But somehow, Wentz creeped his way out and took off for a 17-yard run for an Eagles first down to prolong the drive. The Birds eventually scored on the drive thanks to a 10-yard pass to Agholor to push Washington into a deep hole from which they never recovered.

But for all the cheering for Monday’s victory, there could be some difficult days ahead. For starters, the Eagles lost perennial Pro Bowl left tackle Jason Peters to an ACL and MCL injury to his left knee and they lost middle linebacker Jordan Hicks to a ruptured Achilles tendon. Both are out for the season.

Hicks and Peters will definitely be missed, but Pederson and the players have had a “next player up” mentality. Considering the list of players that were already on the Birds injured, the so-called next guy has certainly performed well for the Birds.

“When you look at the injury list and the guys that we’ve lost: [RB] Darren Sproles, [S] Chris Maragos, JP [Jason Peters], Jordan [Hicks], guys that are significant starters and role players, leaders on your football team. Captains of your football team. It can make an impact,” Pederson said.

“And I think one of the things that I’ve talked about, and hopefully you guys have seen it with the team and talking to the players, is it’s definitely the next-man-up [mentality],” Pederson continued. “And they rally around the guys that are hurt, number one, [and] support them.

On defense, linebacker Nigel Bradham who has been playing lights out in both pass coverage and against the run, will be calling the signals in Hick’s spot. Safety Malcolm Jenkins said he’s confident in Bradham’s ability to lead the defense.

“(Bradham) knowledge of the defense has elevated this year and his play has elevated and it couldn’t come at a better time when we’re losing Jordan Hicks,” Jenkins said. “(Bradham) is the signal and guys have faith in him. There’s no drop off or miscommunications.”

The Birds have managed to win the games despite those key losses. But they can keep doing it for the rest of the season? That’s the big question.