“With The First Pick In The Draft…” 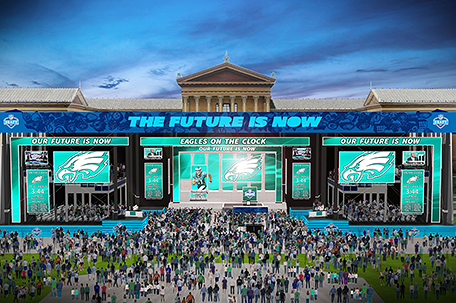 For the first time since 1936, the NFL Draft is making Philadelphia the center of the professional football universe.

If the Super Bowl is the biggest event on the National Football League’s calendar when it comes to fan participation and interest, the NFL Draft comes in at a close second.

The three-day spectacle that is the 2017 NFL Draft has invaded the Benjamin Franklin Parkway, bringing with it some of the nation’s best athletes and a slew of free activities for fans young and old.

According to the Philadelphia Convention and Visitors Bureau, about 200,000 football fans representing all of the league’s 32 teams are expected to come to the Parkway for the Draft and the NFL Fan Fest, both of which began Thursday night. In comparison, the final Mass of the World Meeting of Families featuring Pope Francis brought just under 150,000 to the Parkway.

In addition to the Draft itself, the NFL has spent much of the last week doing a variety of community events around the city. From a pollinator planting at Hunting Park to a talk on good character at the William Ziegler Elementary School in Northeast Philadelphia — featuring NFL Commissioner Roger Goodell and Philadelphia Eagles greats Bill Bergey and Hollis Thomas — the league has tried to get fans into the spirit.

The draft is the first major event of Mayor Jim Kenney’s tenure. As the city’s Eagles Fan-In- Chief, he welcomed the chance to showcase what the city has to offer through both the draft and the annual Penn Relays, which are also going on this weekend. 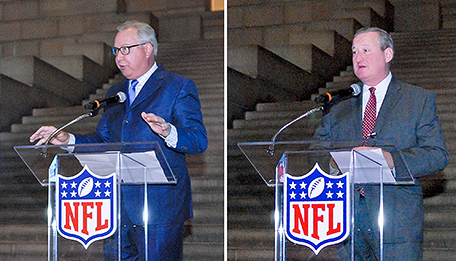 Both short and long-term, the NFL Draft will bring benefits to the city, Kenney said. With 40 million watching on television and more than 200,000 people on the Parkway itself, the chances for people to see the city as a place to visit, do business, or go to college go up.

“Obviously, there’s a direct benefit for the hotels, restaurants, and transportation,” he said. “Our public transit is going to get a real shot in the arm over the next couple of days. But you can’t quantify the value of having Philadelphia and its skyline, and its neighborhoods and its amenities seen on television on almost a continuous basis for three full days. You couldn’t buy that much commercial time.”

That said, Kenney does recognize that bringing this spotlight to Philadelphia doesn’t come without a cost. But the city has tried to make sure that those in the neighborhoods surrounding the Parkway experience as little discomfort as possible, by involving the residents as much as possible, he said.

“With any large event, people are going to be inconvenienced, and we try to balance that,” Kenney said. “But I think that for the overall good of the city, these events are worth having.”

In addition to the possible financial benefits to the city, the NFL has spent the week doing events around the city as part of its Legacy program. The School District of Philadelphia and Smith Playground at 25th and Jackson Streets in South Philadelphia are among the entities that will benefit from NFL Play 60 grants. 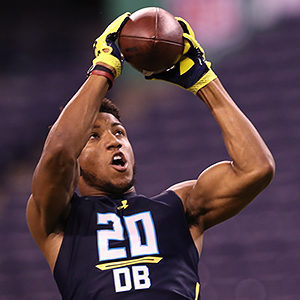 Leaving something behind for the city’s children was something that the host committee was really committed to, said former Eagles quarterback Ron Jaworski, co-chair of the NFL Draft Host Committee.

“It’s not just a focus on football,” Jaworski said. “We wanted there to be a legacy. We needed for it to be a legacy of playgrounds and ball fields. There are things that are happening in Philadelphia because the draft is here that wouldn’t be happening if the draft wasn’t here.”

As part of its agreement with the City, the NFL has an option to bring the draft back to Philadelphia in 2018. It will be competing with other cities — including Dallas, the home of the Cowboys — for that honor.

Jaworski hopes that this year’s draft will show the NFL that the Draft should go no further south than Philadelphia.

“It’s been a lot more work than I thought it would be, but I’ve enjoyed every minute of it,” he said. “I hope that [the NFL] will see what I know…that Philadelphia is a great city.”

The Draft also represents hope for football fans wishing that their team would get better and make the leap from also-ran to Super Bowl contender. Some of the league’s all-time great teams like the Pittsburgh Steelers of the 1970s and the Dallas Cowboys of the 1990s became successful by drafting franchise quarterbacks, impact defensive ends and other pieces that became the final peg in their Super Bowl puzzle.

For the Eagles and their fans, the 2017 Draft will be about adding much needed pieces to a roster that needs just about everything.  At the end of the 2016 season, head coach Doug Pederson and some of the players said the Birds were close to being a contender and a few good players away from being a playoff team.

The mystery for the Birds, who have the 14th pick and their fans is who will be the first-round pick? Will it be a top-flight wide receiver like Clemson’s Mike Davis, or running back like Florida State’s Dalvin Cook to help quarterback Carson Wentz? It could also be a pass-rushing defensive end like Tennessee’s Derek Barnett or a cornerback like Alabama’s Marlon Humphrey. 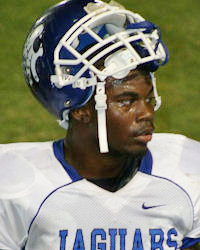 “We have a lot of scenarios that we’ve been talking for the last couple of weeks,” said Joe Douglass, the Eagles vice president of player personnel. “There’s probably about seven or eight different scenarios moving forward for Thursday night.”

Were it up to Jaworski, the quarterback that led the Eagles to the 1980 Super Bowl, the team would be on the lookout for a shutdown corner.

“There’s not a proven corner on this team,” he said. “There’s not a guy that’s lined up and played significant time and played at a very high level; as the NFL now changes the way it approaches offense. Last year, in 58 percent of the [offensive] snaps, there were three wide receivers on the field. That tells you one thing, if they’re putting three wide receivers out there, you’d better have five good defensive backs that can cover. So when I look at this roster, and I look at the way the league is evolving and personnel, I think the Eagles need to get corners in this draft.”

For the players in the Draft, walking the Red Carpet and hearing Commissioner Goodell call their names and bring them to the Art Museum Stage is the culmination of a lifelong dream. The anticipation of becoming a professional football player will be exciting both to them and their families.

But once a player is drafted, he, his family and everyone around him will have a life-changing experience. For those projected to go in the first round, particularly those from humble beginnings, lives that in some cases have been lived in abject poverty will be introduced to wealth that they have never experienced.

The transition from want to wealth can be stunning.

“How does their life change? Dramatically, drastically,” said Tashyra Ayers, who runs the group Female Football Frenzy, a non-profit that works with athletes and their families in community involvement and awareness.  “At the end of the day, we’re talking about young kids, young talent that’s going into the league. Suddenly, they have access to things that they did not have access to, and that includes money. That includes women–that includes fame…”

“I think that one of things that is so important in any transition of this magnitude is to have that support system, transitional system that’s able to guide you,” Ayers continued.

To help make the transition a little less stunning, the rookies have to attend a number of seminars about how to handle their newfound fortune as well as having to perform well on a stage that doesn’t always guarantee success.

“First of all, players have to [have] somebody in their lives that’s going to tell them the truth,” Cobb said. “If they’re doing something [wrong] that no one knows about it, stop doing it because everyone’s going to know about it soon.”

The NFL Draft begins on Thursday night and will be simulcast on ESPN and the NFL Network. Coverage begins at 7p.m. on Friday and at noon on Saturday on those two networks.