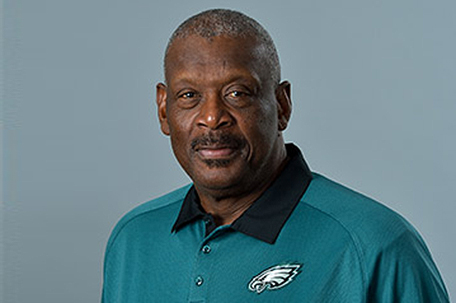 Philadelphia Eagles great Harold Carmichael will finally, at long last, be inducted into the Pro Football Hall of Fame.

One of the great joys that I’ve had as a sportswriter is seeing really good athletes that have been underrated and overlooked through no fault of their own finally get the accolades and respect that they deserve.

For many years, wide receiver Harold Carmichael, one of the Philadelphia Eagles all-time greats, has been denied entry into the Pro Football Hall of Fame in Canton, Ohio. This is in spite of being one of the best receivers of an era of the NFL where the game was geared more to the run than to the pass.

As the Hall of Fame voters got younger and memories of bygone years faded, it appeared as if the exploits of the Jacksonville, Florida native would be forgotten and he would never wear that coveted gold Hall of Fame jacket that he so richly deserved.

After 31 years of eligibility, Carmichael on Wednesday was finally selected for induction in the Pro Football Hall of Fame’s Class of 2020.  The former Southern University star was a seniors’ selection by a special Blue-Ribbon panel at a meeting held last week at the Hall-of-Fame’s offices in Canton, Ohio.

I can’t think of a nicer, more congenial guy to be selected into the Hall of Fame. Carmichael is proof positive that nice guys do finish first. I’m also happy that sports writers like myself, the Philadelphia Tribune’s Donald Hunt, and a host of other reporters and broadcasters made the case for Carmichael through their columns and feature stories.

Carmichael, who played with the Eagles from 1971 to 1983 and with the Dallas Cowboys in 1984, was among 10 senior players chosen for induction, a list that includes former Pittsburgh Steelers star Donnie Shell, the late Winston Hill, a former New York Jets offensive lineman who protected Joe Namath during the Jets upset of the Baltimore Colts in Super Bowl III, and former Dallas Cowboys safety Cliff Harris. All of these guys should have been in the Hall of Fame a long time ago in my opinion.

That is definitely the case for Carmichael.

When Carmichael retired in 1984, he had 590 receptions for 8,895 yards with 79 touchdowns. He was a four-time All-Pro and was seven-time all-NFC selection. When he retired, he was fifth on the all-time list.

What makes Carmichael’s accomplishments as a wide receiver so special is that he caught the bulk of his passes in an era when defensive backs could bump pass receivers downfield as long as the ball was not in the area. That’s why it was called bump and run coverage. Since 1978,  a defensive back can only bump a receiver within five yards away from the line of scrimmage.

Since that rule change, the passing game has flourished and receivers have been putting up astronomical numbers in the passing game. If the rules had been what is now, Carmichael might have caught more passes for more yards than the players of today.

Still, Carmichael managed to catch 40 or more passes in nine straight seasons. From 1972 to 1980, Carmichael caught at least one pass in 127 straight games. He was a part of a four-year playoff run in which the Eagles won their first NFC East crown and made their first appearance in the Super Bowl.

That said, Carmichael, who is also on the NFL’s All 1970s team, finished his career with more receiving yardage than guys like former Miami Dolphins and Cleveland Browns star Paul Warfield and former Pittsburgh Steelers wide out Lynn Swann.

That’s why I have often said that Carmichael should have been in the Hall of Fame a long time ago. I think with all the astronomical numbers that guys like Jerry Rice and Randy Moss have put up over the years at the receiver position, it’s easy to overlook the guys from the 1960s or 1970s like Carmichael or Dallas Cowboys all-time great wide receiver Drew Pearson, another guy who deserves to be in Canton.

Every time I’ve run into Carmichael at an Eagles game, I’ve told him that he deserves to be in the Hall of Fame.

Now,  I can’t wait to congratulate him.