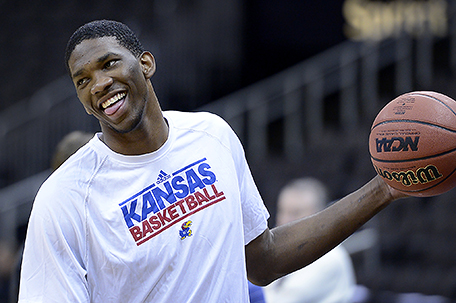 ABOVE PHOTO:  If Joel Embiid can stay healthy, the Sixers could be a good team in the future.  (AP Photo/The Kansas City Star, Rich Sugg)

Last Sunday I was a guest on 94 WIP-FM’s Ricky Ricardo Show and we discussed the possibility of the Philadelphia 76ers taking Joel Embiid of Kansas in the NBA Draft. Embiid, a 7-foot center, has a stress fracture in his right foot.

A fan called the show and vented his spleen about how he felt it would be idiotic for the team to take yet another big man with a damaged leg in the draft. He was angry to the point of hyperventilating.

While there are bigger things than basketball to be that upset about, this sentiment among fans is certainly understandable considering the franchise’s current fascination with with big men with leg and foot problems.

Much to the chagrine of Sixers fans who are starting to wonder aloud if general manager Sam Hinkie and head coach Brett Brown know what the heck they’re doing, the team did indeed make Embiid the number three draft pick this year despite his having a fractured navicular bone.

(As point of information here, a navicular bone fracture is the same break that ended the careers of  Bill Walton and Yao Ming. Just sayin’…)

During the last three years, 76ers fans have been enduring big men with leg problems. Last year, the Sixers drafted Nerlens Noel, who didn’t play a quarter with the team because he was rehabbing the ACL in his left knee.

And speaking of big men with bad feet, Sixers fans are still smarting from the “thievery” of free agent center Andrew Bynum whose bum legs prevented him from putting on a Sixers uniform, but not from rolling a few games at a local bowling alley.

(It was as if the Los Angeles Lakers saw the 76ers coming. The Karmic Retribution from that trade is probably why the Lakers haven’t done much in the last two years.)

Meanwhile, Hinkie has been telling fans to patient with the team. That’s understandable. The rebuilding process for the Sixers is going to take some time. Or at least that’s what management is telling fans that will probably have to experience yet another 19-63 season.

In addition to the team picking yet another big man who won’t be running up the court any time soon, Sixers fans are also more than a little annoyed about the team acquiring 6-10 Croatian power forward Dario Saric, who will spend the next two years playing for a pro team in Turkey.

Saric can at least play. He just can’t play for us.

If Embiid and Noel become the forces in the low post that Sixers management is banking on, Saric turns out to be the Second Coming of Dirk Nowitzki, and if Rookie of the Year Michael Carter-Williams continues to grow at point guard, the Sixers braintrust will be hailed as geniuses and will never want for a steak or a beer in this town again.

Fans will even forget the seasons that were sacrificed in the name of getting higher draft picks if it leads to a parade down Broad Street in the next five or six years.

But if the gambles that the Sixers’ management are making don’t pay off, and pay off soon, Hinkie and Brown will discover what many Philly Sports Managers have found out: Philly fans will run you out of town on a rail…and don’t be surprised if you see a pitchfork, a torch,  or both.

And every sports talk radio host, fan, social media pundit, blogger and columnist in Philly Sports Land, including Yours Truly, will never let them hear the end of it.