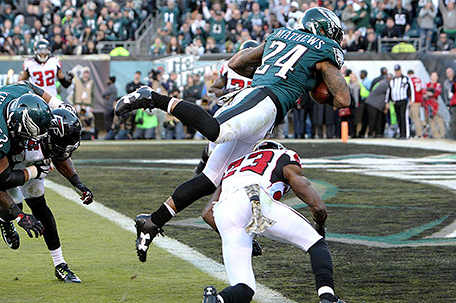 ABOVE PHOTO:  The Eagles grounded out a 24-15 victory over the Altanta on Sunday. The Eagles improve to 5-4 on the season and remain undefeated at Lincoln Financial Field. Ryan Mathews made his return as the Eagles lead back with 108 yards an two touchdown on 19 carries.  (Photo by Webster Riddick)

The Philadelphia Eagles head to Seattle this week to play the Seahawks.

Coming off a huge home win over the Atlanta Falcons, the Philadelphia Eagles are looking to maintain the stout defense and successful  ground game that they showcased against the Falcons against a hot Seattle Seahawks squad fresh from a thrilling road win over Tom Brady and the New England Patriots.

Against Atlanta, the Birds rolled up 208 yards on the ground. Running back Ryan Mathews gained 109 yards on 19 carries and rookie Wendell Smallwood added 70 yards on 13 carries. The Eagles held a nearly 2-1 advantage in time of possession, holding the ball for 38-minutes and 10 seconds.

For an Eagles offensive line charged with protecting rookie quarterback Carson Wentz, the strong run game that the team had last week was a beautiful thing because it allowed Wentz to do the great things in the passing game he’s capable of doing when he’s protected in the pocket and the defense is kept off balance.

“It opens up the whole playbook because now you got play-actions, you got naked (bootlegs),” said Jason Peters, the Eagles left tackle. “Running the ball during the game is great because the defensive line and the linebackers on the second level really don’t know. Now you suck them in, so now guys are open on routes.”

If head coach Doug Pederson’s offense can have a good ground game against a stingy Seahawks defense that’s allowing just 96.8 yards a game  on the ground, he will be cooking with gas.

“This group stunts in games and they’re fast; their linebackers are downhill. Safeties are involved,” Pederson said during his Wednesday press conference.  “It’s still an eight-man box, you know. You are going to see [Seahawks safety Kam Chancellor] down around the box a lot, and he’s an extremely big, physical player. And that’s what they do. Then they try to take that run game away from you. They have been successful doing that.”

If the Eagles can’t get anything going in the running game, the focus will return to Wentz and the passing game. If this happens, the Birds are going to have to patiently dink and dunk the ball downfield and they’ll have to do it with the raucous “12th Man” raining down on them at Century Link Field.

That’s a tall order with a Seahawks secondary that’s filled with guys like Richard Sherman and hard-hitting safeties like Chancellor and Earl Thomas.  Chancellor was named the NFC’s defensive player of the week for his performance against the Patriots. He had a forced fumble and was a part of a defense that limited New England All-Pro tight end Rob Gronkowski to just three catches.

“I think the biggest thing is his physical presence in there,” Wentz said. “Down in the box that guy is as hard a hitting safety as there is.”

Seattle ranks 10th in the NFL in passing yards allowed and are tied for second in the league in sacks (29) with the Denver Broncos.  If the Eagles can’t figure out a way to get the running game going, it could be a long day for Wentz and the Birds offense.

“I think we’re going to have to win in the trenches again,” Wentz said. “Be sharp in the passing game, take what’s there and be smart, we’ve got to protect the football, we’ve got to limit our penalties. We still had too many in the last game.  We have to play a sound football game.”

On the defensive side of the ball, the Eagles defense has to figure out a way to put the clamps on Seattle quarterback Russell Wilson and his ability to buy time in the pocket with his legs.

With running back Marshawn Lynch gone, the Seahawks offense goes through Wilson, who has several weapons in the passing game including wide receiver Doug Baldwin (50 receptions, 629 receptions, and five touchdowns) and tight end Jimmy Graham, who has for 593 yards and three touchdowns.

“He scrambles to pass,” said Eagles defensive end Brandon Graham. “That’s when he creates more down the field plays when he’s running around throwing the deep balls. We just gotta make sure we contain him.”

The Eagles are going to have to be really alert when they take the field on Sunday in Seattle.

It’s a good thing they’re going to be in the place that gave us Starbucks.