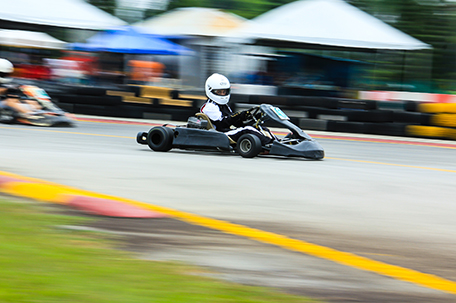 The Urban Youth Racing School celebrated its 20th anniversary of connecting young people of color with the world of motorsports.

His sons Keenan and Jason were among the first graduates of the program that exposes young people to auto racing, motor sports and the mechanics and science of the sport. Over the years, the school has been a vehicle for young people to further their academic careers beyond high school, helping them go to college and eventually into the corporate world. Some have gone onto work as engineers at major corporations and others have worked within the auto racing industry on the corporate side.

That the program encourages the students to see both sides of motor sports makes it special, Simmons said.

“I love racing and I love to see kids race, but hearing that we have all of these great engineers and all of these students in their professions pursuing degrees in other fields,” Simmons said. “That was the crème de la crème to hear all of that because everything is not just centered around racing.”

For the last 20 years, the Urban Youth Racing School has not only exposed more than 6,000 mostly Black and Latino kids from the Philadelphia area to auto racing, it has also given them opportunities to succeed beyond the track and has made a real difference in their personal and educational development.

In 1998, Anthony Martin and his wife Michelle created the program as a means for Anthony to expose young people to experience the thrill, mechanics and science of the sport he loved.

“It was his passion,” Michelle Martin, the school’s CEO, said. “He wanted to see other children live a dream that he couldn’t live, so he wanted to find a way for them to live it.”

Larry Miller, president of Nike’s Jordan Brand, gave the keynote address at the event and Alshon Jeffrey, a wide receiver with the Super Bowl champion Philadelphia Eagles, current NASCAR Driver Brendan Gaughn, and Donna Frisby-Greenwood, president and CEO of the Fund for the School District of Philadelphia, were among the dignitaries presenting awards to the school’s participants.

“Anthony is a great guy with a great heart,” he said. “He saw this through all these years and stayed after it. There were a couple of years where donations were real tight. There were a lot of opportunities for him to give up continuing, but he didn’t.”

The young people who participate in the Urban Racing School Program learn the basics of driving and racing cars. They also learn the mathematics, the science, the technical aspects and the marketing and business ends of auto racing.

It also allowed young people like Christopher Morgan to be around like minds. Morgan, a 2013 UYRS graduate majoring in Religious Studies at the University of North Carolina-Charlotte, the program gave him the chance to pursue something he liked without being picked on for it.

The young people currently participating in the program practice and hone their driving skills on motorized go-carts that they race at the Speed Raceway in Cinnaminson, New Jersey.

During the time the school has been in existence, Martin has established partnerships with a number of educational entities such as Temple University and Fortune 500 companies like General Motors, NASCAR, Joe Gibbs Racing and the United States Navy.

But for all the success that URYS graduates have had outside of the sport, Anthony Martin hopes to someday see one of his graduates on the NASCAR, Indy Car or Formula One race circuit competing professionally.

Increasing the sport’s demographics will help it long term, he said.

“The No. 1 goal is education … but there’s also a strong emphasis on creating a driver, too, “ Martin said. “That is very important to us, too.  It would blow it up because what it would do it would bring a whole new fan base in—a diverse fan base. You bring in some young talented kids of color that people can relate to those stands are going to become more inclusive.”

The biggest obstacle for people of color and for anyone participating in the sport is money, said Willy T. Ribbs, who ought to know. Without the right pool of financing, creating good racers is tough, he said.

“You’ve got to pick out the top talent and groom them,” Ribbs said. “The money must be there. If Chevrolet is going to spend money, then let’s do it right.”

To find out more about the Urban Youth Racing School, go to www.uyrs.com.

Franklin Institute holds “What It Takes” symposium for male youths