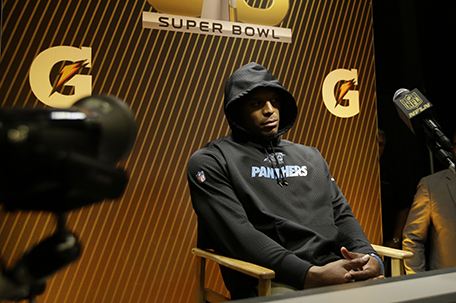 While I can see Carolina Panthers quarterback Cam Newton’s point when it comes to losing, when you’re the face of the franchise, you sometimes have to take one for the team.

Now that I have digested enough of the punditry and highlights of Super Bowl 50 to last a lifetime, I can say with no fear of contradiction that the game’s aftermath was more compelling than the game itself.

While the game’s Most Valuable Player, Denver Broncos defensive end Von Miller had a lights out performance that included 2.5 sacks and two forced fumbles that led to two Broncos touchdowns in his team’s 24-10 win over the Carolina Panthers, he got a lot less attention in his win than Carolina Panthers’ quarterback Cam Newton got in the loss.

Newton, who was named the NFL’s Most Valuable Player the day before he took the field in the Super Bowl, had the spotlight on him after the game for all the wrong reasons. Everyone from NFL Network analysts to the Social Media Sports Echo Chamber was discussing Newton’s abrupt postgame press conference in which he came off as a brooding, petulant child. During the three-minute confab with reporters, he did his best imitation of Seattle Seahawks running back Marshawn Lynch, giving one-word answers before abruptly walking away.

Understandably, Newton understandably wore the disappointment of the loss on his sleeve. It might have been a good idea for the Panthers media relations staff to let him cool down for a while before he met with reporters.

The logistics of the media availability were also bad. Newton could overhear the comments of Broncos cornerback Chris Harris as he talked about how his squad stopped the Panthers. Some people are saying that’s the reason he walked out of there.

Of course, all of Newton’s naysayers came out of the woodwork to blast him for being a jerk with some of it taking on an ugly, racist overtone.

But Newton saw no problem with how he conducted himself in the post-Super Bowl media scrum.

“At the end of the day, when you invest some so much time and you sacrifice so much and things don’t go as planned, I think emotions take over,” Newton told reporters on Tuesday. “It happened, I didn’t want to talk to the media at the time and the truth of the matter is I still don’t want to talk the media. I’m human. I never said I was perfect.

“We got all these people that’s condemning, saying he should have done this, that and the third,” Newton continued, “but what makes your way right? I’ve been on record as saying that I’m a sore loser. Who likes to lose? Show me a good loser and I’ll show you a loser. ”

But that said, Newton is the face of the Panthers franchise and leader of the team. Thus, win or lose, he has to take one for the team. If anything, as his teammates were out there answering questions, Newton should have been there with them. Cornerback Josh Norman was crying on camera and still had the dignity to talk to the media after the game.

If Newton had talked with the media after the Super Bowl in the way he addressed them during the team’s end of the season locker room clean out on Wednesday, the firestorm wouldn’t have started.

In my years of covering sports, I’ve seen great athletes like Joe Theismann and Warren Moon answer questions while dealing with the emotion of being on the losing end of a big game. Even the Seahawks Russell Wilson took one for the team after last year’s Super Bowl loss and put the blame for the fatal, game-losing turnover on his shoulders instead of on the coaches that called a play that folks are still scratching their heads about a year later.

I’d be willing to bet that Wilson hates losing just as much Newton does.

At the end of the day, Newton will grow from this and understand that it’s not about him individually, but as the face of the franchise you have to be accountable to the fans win or lose.