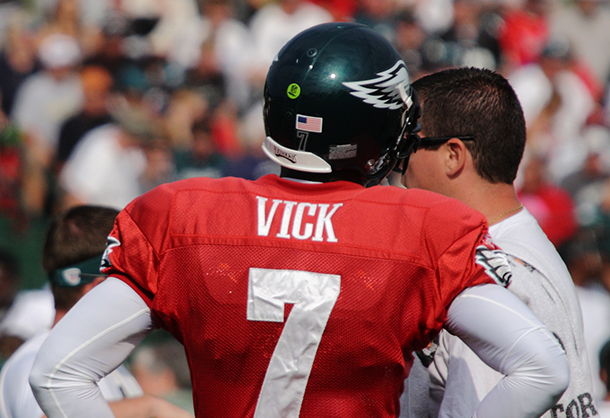 The petition calling for Michael Vick to be removed as an honorary captain for the NFL Pro Bowl is yet another example of the limits of redemption allowed for people of color.

for the Philadelphia Sunday SUN

Whenever African Americans are wrongfully killed while doing things like going to the store for snacks (Trayvon Martin), going to church (by Dylan Roof) or driving to and from home (so many people killed by overzealous police officers I’ve lost count), there’s always a well meaning call for forgiveness and calm + in the Black community.

Going back in time, activists like Rep. John Lewis forgave the late Alabama Gov. George Wallace, a man who once proclaimed “Segregation Now! Segregation Forever!” as he stood in the doorway to block Black students attempting to study at the University of Alabama and looked the other way as acts of brutality were committed against civil rights activists.

Most recently, “The Hug Seen Round The World” between the brother of Botham Jean and Jean’s killer — former police officer Amber Guyger — was another example of the legendary forgiveness of Black folks, a forgiveness we sometimes give without being asked for it.

But of course, that forgiveness is rarely extended to us.

Right now, Change.org and AnimalVictory.org are circulating a petition to have him removed as an honorary captain from the 2020 Pro Bowl. Apparently more than 500,000 people have signed this petition as of press time.

Even though Vick served the maximum federal penalty of 18 months in prison while losing millions of dollars and his livelihood for dog fighting, and has become an advocate of animal rights including pushing for the Animal Fighting Spectator Prohibition Act through Congress, anything he does is not enough.

Especially when you consider the relative silence of these same people when the body of a young Black man is lying on the sidewalk at the hand of someone in authority.

Whether it’s through police brutality, a vicious cycle of poverty and systemic racism that creates poor schools and limits access to jobs, or some self-inflicted way, Black humans are dying on a regular basis.

Where are the petitions against these ills? And tell me why I shouldn’t consider this yet another example of someone using racism and the fear of Black bodies to market their organization and remind us yet again that we matter less than animals to many people?

Whenever we advocate for justice against a racist system, we’re told to “get over it” and our voices are dismissed. Except if the topic is so-called “Black on Black crime,” which is usually only talked about by Whites when it can be used as a racist dog whistle.

While I love animals and deplore dogfighting, the suffering and cruelty that this country continues to inflict on African Americans, a cruelty that dates back to our arrival in the country 400 years ago, is far more egregious than anything Vick could have done to those dogs.

Unlike police officers who go unpunished when they kill Black people, Vick went to jail, served his time and is a part of the process of educating young people on the evils of animal cruelty.

Meanwhile, George Zimmerman, the murderer of Trayvon Martin, is suing the Martin family for “slandering” him by telling the truth about his crime.

So, until one of these “animal rights groups” get on their computers in the gentrified neighborhoods that they’ve priced poor people of color out of and start creating petitions demanding a change in the cruel and inhumane conditions of Black people, miss me with your outrage over Michael Vick.

When Fluffy the Poodle’s life is more important to you than the lives of poor people of color, you need to ask yourself, “Is my racism showing?”

Vick talks to Conn. students about dangers of dogfighting

Vick is the MAN! Finally….