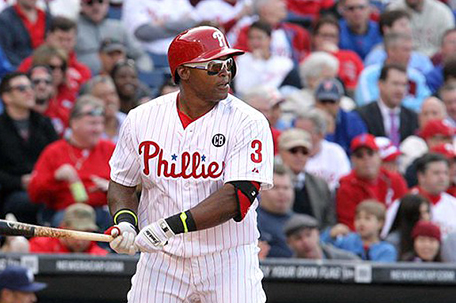 ABOVE PHOTO:  Phillies right fielder Marlon Byrd had two runs batted in, but it wasn’t enough as the Phils lose their third straight.

There are four things that the Phillies (3-5) have suffered with in losing their first two home games—poor fielding, lack of clutch hitting, poor relief pitching and Milwaukee’s Brewers right fielder Ryan Braun.

After hitting three homeruns on Tuesday, Braun’s two-run triple helped to break open a tie game and propelled the Brewers (6-2) to a 9-4 win over a Phillies team that is mired a three-game losing streak Wednesday night.

That decisive eighth inning was a microcosm of the Phillies early-season troubles. The inning started with reliever Antonio Bastardo issuing a walk to first baseman Mark Reynolds, who stole second and wound up on third on a sacrifice bunt by second baseman Scooter Gennett.

“(Bastardo) had him in a 0-2 hole,” said Phillies manager Ryne Sandberg. “Lead-off walks are tough and lot of times they circle the bases.”

With the infield in, pinch-hitter Logan Schafer hit a slow line drive down the first-base line that caromed off Ryan Howard’s glove and into right field to bring home Reynolds with the go-ahead run. Howard was charged with an error and the Brewers took a 5-4 lead. It got even worse when Braun tripled home two more runs.

In the Brewers ninth inning, Phillies reliever Justin De Fratus gave up a two-run homer Reynolds to wrap the game up for a hot-hitting Milwaukee squad.

The Phillies committed two errors. A fielding error in the first inning by veteran shortstop Jimmy Rollins eventually led to two runs and Howard’s eighth inning miscue led to the go ahead run.

For the last three games, the Phillies have committed six errors that have resulted in 15 runs. Throughout spring training, Sandberg had been emphasizing fundamentals on defense. So far, it seems to have fallen on deaf ears.

“We definitely have to tighten that up. I don’t what to say about it,” Sandberg said. “We work at it, we talk about it. Some of the plays are routine and we haven’t made routine plays. … It’s also early season stuff, but we’re in the process of working all that out and then stress it. That’s for sure.”

Late innings have not been a strong suit for the Phillies team so far in 2014. In the last two games from the seventh inning to the end of the game, Phils relief pitchers have given up nine runs. Close games have inevitably become blowouts when Phillies relievers have come into game. Bastardo was credited with the loss.

Meanwhile, the Phillies offense got off to a good, scoring three runs on a balk and RBI fielder’s choices by Marlon Bryd and Domonic Brown to give the Phillies a 3-2 lead. The Brewers tied the game on an RBI double by shortstop Jean Segura in the second inning. A solo homer by centerfielder Carlos Gomez gave Milwaukee a 4-3 lead.

The Phillies tied it in the fifth on an RBI single by Byrd that scored catcher Carlos Ruiz, but that’s as close as the Phillies would get.

Phillies pitcher Roberto Hernandez had a decent outing for the Phillies after a rough first two innings. In the first inning, he allowed two runs on two hits and threw 28 pitches in the inning. For the game, he allowed four runs (three earned) on seven hits with nine strikeouts and one walk in five innings. He threw 104 pitches.