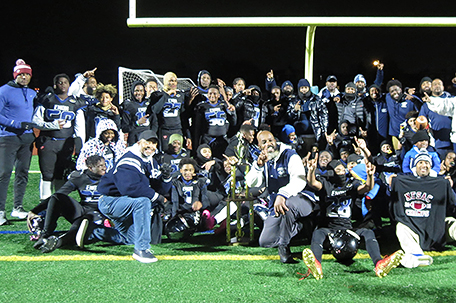 One of the greatest ways to provide children with positive alternatives in life is to create a vision. Oftentimes that comes in the form of youth programs that give them a chance to learn how to trust adults in ways  that will impact them for a lifetime.

The Enon Eagles beat the Lower Bucks Outlaws 27-6 at Northeast High School football field in front of 300 enthusiastic fans. With this championship secured, the U13 team will go to Tampa Bay, Florida to play in the National Championship in their age bracket.

Enon’s senior pastor, Alyn E. Waller, reflected on what it took to create this vehicle for the hundreds of kids in his program, as well as the parents that support all of the church’s youth sports programs. Many of the families also attend the church, which gives their kids balance and stability, and encourages them to pursue their dreams.

“This builds community,” Waller said. “These kids are here. That means that they’re not somewhere else, victimizing or being victims, because they’re here. This is bringing the community together. This is exposing people to the positive aspects of what it means to live in Philadelphia. And there are all types of people out here in the crowd. This is the best part of Philadelphia, not everything else that’s being reported.”

Parental involvement is a key factor in the success of Enon’s sports programs, Waller said.

Enon’s football program has run for 17 years, originally inspired by a young man named Rydell Crab. He challenged the church to start a football league for the youths.  “Pastor, if you can come up with the money, I can create a hell of a program,” Waller recalled Crab telling him at the time.

“It [the program] started as our sports program,” Waller continued. “From there, it was softball and football. Today, we have football, basketball, baseball, track, soccer, martial arts and I’m just grateful for this expansion. The program started in 2003.”

The children who participate in the programs — both boys and girls — are taught important life skills, like the importance of teamwork, community building, personal investment and love for others, and about the love of Christ, Waller said.

One of the parents in attendance, Angela Williams, whose son Jemel Jr. is on the team, praised Enon’s football program.

“I love the program at Enon,” Williams said. “Jemel’s been playing for four years. He loves the team and he looks forward to practice. I love the coaches and the coaching staff that direct the children in the right direction.”

“Jemel didn’t have any trouble in school,” Williams continued. “Jemel is a pretty good kid and I’m not just saying that because I’m his mom. He just wanted to do something, and one day he woke up talking about football and stats. And then we put him on the team. He’s one of the running backs. I feel good that our son has found something that he likes to do and he’s good at it. He likes his team and he likes to have chats with his teammates and they keep in touch to keep with each other. And I like that.”

One “diamond in the rough” that stood out during the game was running back Taj Horton, who exploded for three touchdowns and dominated the game with his pounding running style. Horton is a young man of very few words, but when the ball is in his hand, he becomes, as the coaches from the other team describes, “a beast.”

Horton spoke about his game and what the win meant to him.

“My game plan was to focus and help my teammates out and stay in the game. It feels great [winning the championship] to come back home and be with my team again — and Pastor Waller is a very great man.”

The Enon Eagles also had two girls on the team — one was Megan Robinson, the starting left guard on the offensive line. She was excited to win another championship with the Enon Eagles.

“I’ve been here before [to the championship game], so it’s not new,” Robinson said. “I’m so hype that we’re going again. The program has done a lot for me. These are my brothers, man. They are my friends and the program gave me an opportunity to play ball.”

The hard work of coach Henry Clack and his coaching staff showed what impact adults can have on young people when they fully engage them — an everlasting relationship and bond that make youth feel comfortable about adults in their lives.

“Well, you know, at the start of the game, I told them that they needed to be hungrier like the previous year before,” Clark said. “Winning another championship is an indescribable feeling. We went undefeated for two years, and [then] COVID hit. I’ve been with these guys since they were six years old.”

“My coaching goes further than just on the field,” Clark added . “If a kid has a problem in school or just anything, he can always call me up — and that goes for any of our coaches — because we’re always there for them. It’s a real good feeling, man, and it’s indescribable. Just to even touch their hearts is unbelievable, because they will never forget us.”

In a city where news coverage about our young people is often negative, portraying our children as troubled and dysfunctional, it is encouraging that youths in Philadelphia can participate in sports programs like these that provide positive alternatives and the chance to make a difference in their lives.