Enon Eagles U13 football team, national champions on and off the field 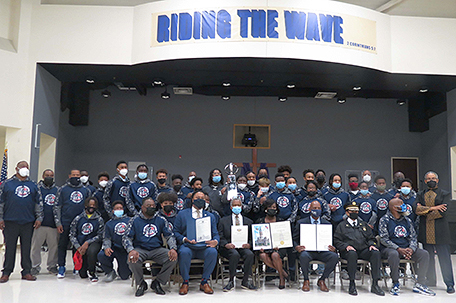 This is the Enon Eagles U13 team’s first-ever Super Bowl (National Championship) win. After winning the NESAC League Championship on November 21st, the Enon Eagles football team was ready to travel to Plant City, Florida and play for the dream of winning a national championship for their church, coaches, parents and the city of Philadelphia.

After winning the game, each player received a wrestling-style championship belt and a thick rope type gold chain with a neck piece with the words “National Championship” on them.

“So, I told these guys, if y’all don’t live up to the reputation that we put out here, we need to go and handle our business — and that’s what they did,” he added. “They are great young kids. I wouldn’t trade them for nothing in the world. If I had to go on the football field, I would take those kids. I’ve been with some of those kids since they were six years old.”

Clack and his staff also gave the kids valuable information for their off-the-field life when they’re away from the Enon football program.

“The main thing is, stay in school,” Clack said. “Stay off them corners and do what your parents are telling you what to do, because this is just one stepping-stone in the life that they’re going to have. And hopefully, they’ll have much more success at the next level.”

“That’s all we’re doing,” he continued. “We’re just preparing them for more than football, life experiences like, you know what I mean — how to be a better teammate, how to be a better person and how to be God-fearing to everyone. Not to just one race, but to everyone. And that’s basically it.  We trying to influence them not just on the football field, but in school. Obey your parents, do the right thing and keep your circle (of friends) close and watch who you are hanging with and know what your other friends are doing. We tell them, keep your circle close, keep your mask on and stay safe.”

We talked to the team’s “Most Valuable Player” and the overall MVP Lucas Johnson, wide receiver, (12), who will be attending LaSalle High School in September. This young man epitomizes what type of players this program has and how they represent Enon Tabernacle Baptist Church.

But his play on the field is what made the difference for this year’s national championship team.  We asked him to talk about his play and how the coaches motivated him and what his mindset was when the game started.

“The game before that I played really well in,” Johnson said. “My coach said, do it one more time, so, that’s what I did.  I had to do it again because he asked me to. I had about 3-4 catches and 2 touchdowns in the game.”

We asked Johnson what his mother thought of his playing in the championship game.

“I think she was surprised, because it was a lot, going down to Florida,” Johnson said. “I didn’t think I was really going to have a good game and perform the way I did. I try to be focused and be positive.”

As Pastor Waller and the Enon Tabernacle Baptist Church staff were preparing the celebration, and the players were receiving their new National Championship jackets, we were about to speak with him about the support of the church, and what it means to celebrate these young people for something they will be remembered for a lifetime.

“Today was an opportunity for us to celebrate them in some small way really quick in church,” but this is where it started and ends,” Waller added. “It’s all about church, it’s all about reaching people for the cause of Christ and we don’t hide that fact. With these kids exposed to our faith as a part of the program, it’s not an option and we’re grateful for what has happened this year with them and their parents and their coaches.”

What Waller, the men and women have done with his sports program is the prototype to the solution of youth involvement in negative alternatives in their communities.

The challenge for impoverished and heavy crime communities like Mantua is to get the pastors and churches to extend themselves and use community playgrounds, create sports and educational programs where youths engage with those less fortunate in the community. That’s the ultimate vehicle of God’s service to his fellow man to give a positive alternative to a kid and that’s how we can change the culture in our neighborhoods.