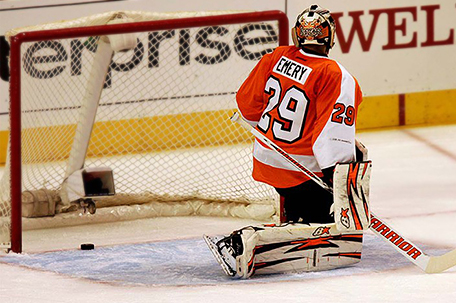 ABOVE PHOTO:  It was tough night for Flyer goalie Ray Emery.  (Photo by Webster Riddick.)

It wasn’t a difficult decision for Flyers head coach Craig Berube to start Ray Emery in place of an injured Steve Mason.

After all, Emery had a strong effort in the Flyers game two win over the New York Rangers at Madison Square Garden—the team’s first win at the world’s most famous arena since 2011.

Too bad Emery couldn’t stop the Rangers in game 3 as New York dominated every phase of the game in a 4-1 loss played in front of a packed house of orange clad fans.

New York has a 2-1 lead in the best-of-seven NHL Eastern Conference First Round series, meaning Friday’s game 4 at the Wells Fargo Center is a must win.

Despite outshooting the Rangers 32-23, the Flyers couldn’t get anything past goalie Henrik Lundqvist (31 saves) except for a goal late in the first period by Mark Streit. The Rangers defense stuffed the Flyers offense for most of the game with New York blocking 28 shots and smothering the Flyers at every opportunity.

“I think you’ve got to move the puck quicker than we are. I think it’s too predictable in what we’re doing with (Claude) Giroux and Timonen,” Berube said. “We had a lot of zone time with the puck. They did a good job with the puck, but we gotta get it to the net. If you don’t get it to the net, you’re not going to score. We gotta build deception here and there and get them through.”

The dearth of scoring opportunities on the offensive end really manifested itself in the Flyers power play. The Flyers were 0-for-5 with the man advantage.

“We try to get the pucks through the net, especially on the power play,” said Flyers defenseman Kiimmo Timonen. “We gotta do it better. They blocked way too many shots and we gotta find away to do it better and do it quicker.”

Within the game’s first four minutes, Rangers center Derek Stepan scored the game’s first goal when he rebounded a shot by teammate Rick Nash that caromed off the left glove of Emery and into the net. About seven minutes later, Martin St. Louis put the puck past Emery to give New York a 2-0 lead midway through the first period.

Berube said Emery didn’t play a bad game and could have used more help from his defense. He also said falling into an early 2-0 hole hurt his team. Emery had 16 saves against 20 shots on goal before being pulled for Steve Mason in the third period. Berube did not say who was going to start in Game 4.

“I’m sure (Emery) wants a couple back, but he’s battled,” Berube said. “He gave us an opportunity going into the third period. … You can’t get down 2-0 in games like this. We gave ourselves an opportunity, but we need the better start.

The Flyers finally got on the board late in the opening stanza on a goal by a streaking Mark Streit, who took a pass from Jakub Voracek who was skating at the circle to the left of Lundqvist.

Despite outshooting the Rangers in the second period, the Flyers found themselves in a two-goal deficit thanks to a goal by New York defenseman Dan Girardi. The Rangers final goal of the game came on a score by former Flyers left winger Daniel Carcillo, who banged his stick on the glass near the Flyers goal and then stared at a fan.

Flyers do everything but score in season-opening loss to Toronto