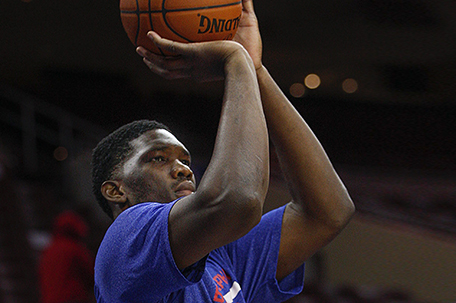 Three weeks before the 2015 NBA Draft, the Philadelphia 76ers and their fans had visions of the team using the third pick in the draft to pick up Ohio State point guard D’Angelo Russell or China league sensation Emmanuel Mundiay to run the offense with Nerlens Noel and 7-foot center Joel Embiid at the Wells Fargo Center.

But the bad news on Embiid’s lack of progress on the injured right foot that forced him to miss all of what should have been his rookie season has Sixers fans shaking their heads instead.

“Joel and Sixers personnel travelled to Los Angeles for a series of routine exams with a number of physicians who have been actively involved throughout this process,” Sixers owner Sam Hinkie said in a statement issued to fans. “During his visit with Dr. Richard Ferkel, a standard CT scan on Joel’s right foot revealed less healing than anticipated at this point… Discussions regarding the appropriate next steps are currently ongoing and we will share an update once it becomes available.”

According to some reports, there’s a distinct possibility that the Embiid may not play next season. That’s really bad considering that Embiid reportedly missed rehab sessions, has had weight issues and has argued with the team’s trainers.

It’s also a bad thing with considering the YouTube videos of Embiid that show that he was getting better and starting to look good on the court during workouts. One of the videos shows Embiid dunking the ball from between his legs at the end of the team’s pre-game shoot-around.

Should he have been doing that given the state of his foot? Especially since now it looks like he could be facing more surgery and thus another year off the court?

For a fan base that’s not only had to endure some of the worst basketball ever played at the Wells Fargo Center, but has also had to watch in horror as former Sixer Andre Iguodala not only picked up a championship ring with the Golden State Warriors, but was also crowned the NBA Finals Most Valuable Player, this latest setback to the team’s rebuilding efforts might be the one that makes folks start giving Hinkie the side-eye.

But we won’t know just how bad Embiid’s lack of progress in terms of his injury is until Draft Night. What the Sixers do with the third pick will tell the tale.

According to some recent mock drafts, the Sixers could go after a big man like Duke’s Jahlil Okafor, Kentucky’s Karl Anthony Towns or Latvian power forwards Kristaps Porzingis if neither of their first two choices is available. The team could also take a look at Kentucky’s Willie Cauley-Stein.

But since the Sixers traded former Rookie of the Year point guard Michael Carter-Williams, that might be the need they meet first. They liked Ohio State’s Russell and Hinkie won’t want to let a fan base that’s finally starting to get a little skeptical and a media that always was think that the organization changed its way of draft thinking due to the lack of progress on Embiid’s injured right foot.

The bottom line is that the Sixers need to show that all of the tanking they did to get these lottery picks is going to lead to something. All that the team has gotten in the last two drafts for all of its losses is one healthy player in Noel, and he spent his rookie season riding the pine due to injury and one in Carter-Williams that they traded away before he had a chance to develop.

For those who are enamored by the unconventional thinking of Hinkie and company, it’s all about patience and letting things work themselves out.  Hinkie apparently has his own timeline and in his mind, the gumbo is going to be done when he thinks it’s done.

After all, these are merely the quirks of a genius at work. Right? (crickets)

But in the course of getting things done, 76ers fans want to see some semblance of light of what has been a very dark tunnel for a franchise that’s made it to the NBA Finals just twice in the last 32 years.

Especially since foot injuries, specifically the kind that come with shooting yourself in the foot, seem to be this team’s forte.