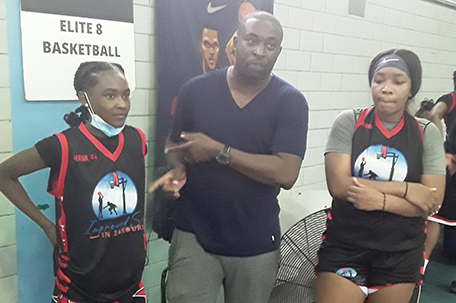 Continuing the fight to keep women athletes on the basketball court is one man who has provided a place for older female basketball players to come and display their skills. His name is Kenyatta McKinney, and he has started his own 18-and-older women’s basketball league called The Elite 8 Women’s Basketball League.

McKinney started his women’s league after the pandemic wiped out the college basketball season at Community College of Philadelphia. His league gives older female players a chance to display their basketball talent and skills.

Last May, McKinney ran a basketball draft at Hank Gathers Recreation Center, which allowed captains to pick their teams. From that draft, 45 players were picked, and five teams were formed. All five teams were named after WNBA teams.

To make the league more exciting, McKinney has no coaches running the teams.

McKinney said he built the league for players to show up and play. So far, he likes the way the players have adapted to his league.

“Right now, I want to be the best commissioner I can be,” he said. “If God’s willing, I hope I can keep this going. I know I have to stay focused and keep my eyes on what’s going on right now. With a major sponsor, I would love to expand the league.”

Even though McKinney has no sponsors, he hopes his league can extract corporate sponsorship. Right now, he has the players pitching in for jerseys and paying money for the referees.

For now, everything is running smoothly for the Elite 8 Women’s Basketball League. Tuesday night marked the tip-off of the Elite 8 Women Basketball Championship game. The title game  was scheduled for 6:30 PM. Anyone who’s wants to watch a great championship game is advised to grab a seat inside Hank Gathers Recreation Center. McKinney said the reason he picked the North Philadelphia recreation center to run the league was because that’s where he played basketball as an inspired young player.

“I grew up playing at Hank Gathers Recreation Center,” McKinney said. “I thought the location was a perfect spot to run the league. So far, the fans have been giving us great support. But once again, I still need a major sponsor. With a major sponsor, I can do more things for the league.”

During the season, there was great action on the court. Here are some of the big stars that played this season for the Elite 8 Women Basketball League:

Taylor Blunt, who also plays for the Lynx, scored 11 points while her teammate, Taylor Brown, scored 15 points and picked up 5 assists as they led their team to a 60-55 victory over the Sparks in last week’s playoff game.

Meanwhile, former Temple Lady Owls guard Deja Reynolds plays for the Storm. Reynolds helps run the offense. She’s a very explosive player. She can score points at a drop of a dime.

In addition, Shayla Claiborne has made big plays for the Dream team. In last week’s game, Claiborne knocked down a last-second buzzer-beater in overtime to help her team make the playoffs. Claiborne’s shot was the most exciting buzzer-beater for the season.

To contact Kenyatta McKinney about his Elite 8 Women Basketball League, you can email him at: [email protected]