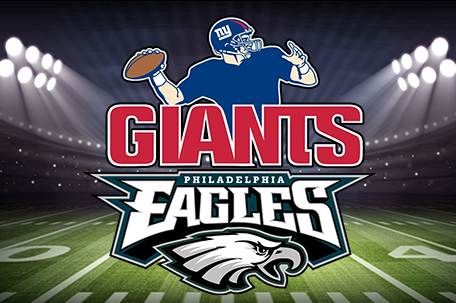 In an NFC East where all of the teams seem to have issues with keeping people healthy and playing with any kind of consistency, the 3-2 New York Giants are in first place and playing better than anyone else.

Whether they’ll remain atop the division heading down the New Jersey Turnpike on Monday night for a game against the 2-3 Philadelphia Eagles at Lincoln Financial Field is anyone’s guess.

The Eagles are looking to build upon the team’s 39-17 victory against the New Orleans Saints, a game that featured the team’s best offensive performance all season. Despite a pair of red zone interceptions from quarterback Sam Bradford, the offense managed to accumulate 519 total yards, including 186 from the ground game. Bradford threw for 333 yards and two touchdowns.

“When you do something once, certainly you want to do it again and again,” Eagles offensive coordinator Pat Shurmur said.  “We’ve talked all along about consistency, whether you’re playing well early or late, you want to do it throughout the game and you want to do it over the course of a few games or the whole season. So now we just have to go back and recreate it.”

The Eagles offense will battle a Giants defense that is second in the NFL against the run, allowing just 80.6 yards per game. But those numbers might be a bit deceiving because the Giants are the worse team at defending the pass, allowing opposing teams to pass over 300 yards per game.

When a defense has those types of numbers, it’s probable that the Eagles will put the ball in the air quite a bit.

The one thing that bodes well for the Eagles is that Bradford has actually played well in his last two games. In his games against the Saints and the Redskins, he started off slow, but played well in the second half.

Speaking of the Eagles defense, it is coming off one of its best performances of the year, both as a team and from individual players, against the Saints.  The Birds sacked New Orleans quarterback Drew Brees five times with the three of the sacks coming from defensive end Fletcher Cox, who was named the NFC Defensive Player of the Week.

This week, they will be facing a Giants offense led by quarterback Eli Manning that likes passing better than running. This year’s version of the Giants offense is similar to the Eagles in that it runs a lot of no-huddle and Manning gets the ball out of his hands a lot quicker than he has previously.

With weapons like receivers Odell Beckham Jr., who missed practice on Thursday, and Rueben Randle, the Giants have a pair of pass catchers that can stretch the defense.  Running back Shane Vereen is another player the Eagles have to pay attention to in the passing game.

In last Sunday night’s game against the San Francisco 49ers, Vereen caught eight passes for 86 yards. In the Giants fourth quarter comeback, he caught three passes for 54 yards when Beckham and Randle weren’t in the game.

Though Beckham, who is nursing an injured hamstring, said he intends to play on Sunday, Vereen could wind up playing an even bigger role in the Giants offense in the event that the electrifying wide out isn’t in the starting lineup.

If the Eagles can somehow recreate the team’s performance against the Saints Monday night, the NFC East suddenly becomes more interesting.

Considering the teams that make this division up, a race for the lone playoff spot for this group might be the only thing that keeps the attention of anyone not playing fantasy football.