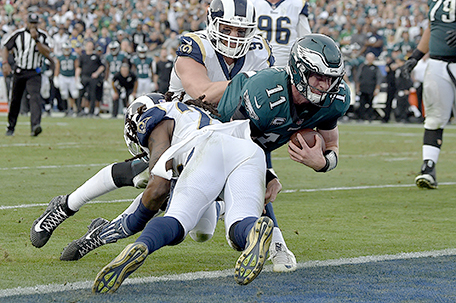 ABOVE PHOTO:  Philadelphia Eagles quarterback Nick Foles (9) celebrates after leading his team to a touchdown during an NFL football game against the Dallas Cowboys at AT&amp;T Stadium on Sunday December 29, 2013 in Arlington, Texas. Philadelphia won 24-22. (AP Photo/Aaron M. Sprecher)

Carson Wentz got the Eagles this far. Now, it’s up to Nick Foles to deliver Philadelphia its first Super Bowl title.

Wentz has a torn left ACL and will miss the rest of the season and playoffs, forcing the NFC East champions to turn to a familiar backup who once had one of the greatest statistical seasons in NFL history.

“The reason we got Nick Foles is for situations like this. I’m excited for Nick,” coach Doug Pederson said Moday. “I hate it for Carson Wentz. I hate it for the season that he’s been having. But at the same time, it’s been the next-man-up mentality and that’s how we approach it.”

Wentz was a favorite in the NFL MVP race during a breakout sophomore season. He threw for 3,296 yards and set a franchise single-season record with an NFL-leading 33 touchdown passes while only tossing seven interceptions.

“From my standpoint, you don’t waver, man. You don’t let people see you sweat,” Pederson said. “You just put your head down and you just go to work. You get everybody ready to play. It was evident when Carson was out of the game, you saw Nick come in and come back and lead us to victory in that game. So that right there is a great step in the right direction.”

Wentz got hurt diving into the end zone on a scramble late in the third quarter Sunday at Los Angeles. Pederson said it appeared Wentz tore his anterior cruciate ligament before contact with two tacklers. The touchdown was nullified by a penalty, but Wentz stayed in the game and tossed a TD pass to Alshon Jeffery four plays later.

Foles replaced him on the next series after the Rams took the lead and rallied the Eagles (11-2) to a 43-35 win that secured the division title and put them in first place in the conference with three games remaining. 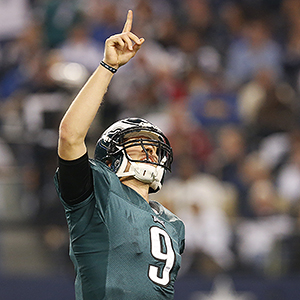 “This has been a resilient football team all season long,” Pederson said. “If there’s ever an opportunity for me as a head football coach to rally the troops, now might be the time.”

Foles led the Eagles to their last playoff appearance — a 2013 home loss to New Orleans. That came after he threw 27 TDs and only two picks in 10 starts after replacing an injured Michael Vick during Chip Kelly’s first season as coach. Foles posted a passer rating of 119.2, the third highest in league history. He tied an NFL record with seven TD passes in a game at Oakland in November 2013 and went to the Pro Bowl, winning the offensive MVP award.

A third-round pick by former Eagles coach Andy Reid in 2012, Foles in his second stint in Philadelphia. He is 20-17 as a starter, including playoffs. Kelly traded Foles to St. Louis for Sam Bradford after the 2014 season. Foles spent a year with the Rams, then a season in Kansas City with Pederson as offensive coordinator, before returning to Philadelphia as a free agent this season.

“My confidence is extremely high in Nick,” Pederson said. “He’s a veteran player who has played and won a lot of games. Nick’s a highly intelligent football player. He’s smart to the point of he and I are going to continue to dialogue like Carson and I did during the week. I want to make sure there are plays in his plan that he’s comfortable with and that he likes. I want him to speak his mind just like Carson would, and we keep going. This is a veteran player we’re talking about. So I feel comfortable doing that.”

Second-year pro Nate Sudfeld is Philadelphia’s No. 3 quarterback. Pederson said he hasn’t spoken to personnel boss Howie Roseman about adding a third quarterback yet. Sudfeld was selected in the sixth round by Washington in 2016 and hasn’t played a down in the NFL.

“Nate’s done a really good job,” Pederson said. “That’s part of the reason why we brought him up (off the practice squad) earlier in the year. Teams were interested in Nate, and we feel really comfortable with him.”

Swan Song: Eagles comeback falls short in what could be Andy Reid’s last game in Philly