Eagles too banged-up to fly past Packers 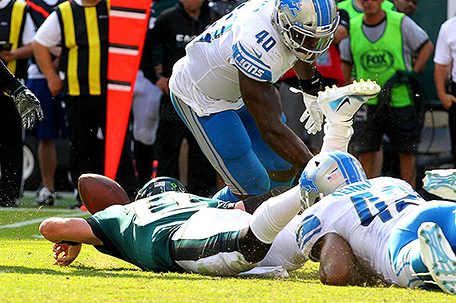 A team considered a strong Super Bowl contender will be at Lambeau Field on Thursday night. It’s not — at least right now — the visiting Eagles.

Philadelphia was among the early favorites in the NFC. Then injuries and sloppiness struck. Now, the Eagles (1-2) are scrambling to get their season headed in the right direction before unbeaten Dallas slips away.

To change their course against the Packers is a hefty order. Green Bay (3-0) has displayed an impressive defense led by newcomers Preston Smith and Za’Darius Smith, and is waiting for its Aaron Rodgers-guided offense to take off.

“Yeah, they’ve added some really talented pieces up front, certainly one on one those guys are pretty dangerous,” Eagles offensive coordinator Mike Groh says. “So we’re very mindful of those guys. They’ve got a talented defense.”

Rodgers is thrilled with the perfect record — Green Bay has allowed an NFC-low 35 points — and not so happy with his own play as the Packers have scored just 58 points.

“I want to play better,” he says. “I want to score more points. I mean, obviously you love having a defense, but I don’t take any satisfaction in having an ‘oh, OK’ performance. No, I want to have greatness out there.”

No. 5 Green Bay is a 4-point favorite over No. 16 Philadelphia. Have to go with Cheeseheads over Cheesesteaks.

KNOCKOUT POOL: Dallas did the job last weekend vs. Miami. Did you think we’d leave the Dolphins Debacle behind this week? Go with LA CHARGERS.

Raiders aren’t worst mess in NFL, but getting closer to it.

Tempted by several underdogs this week. Like Vikes most.

Lions can prove they are for real here. We know Chiefs are.

Drew Brees means that much in spread? Guess so with how Cowboys are playing. Still …

Not sure what Browns are yet. Neither is Freddie Kitchens.

Texans and Colts will battle for division title all season.

As impressive as Danny Dimes-led comeback by Giants, Redskins’ prime-time showing was as unimpressive.

Just what Dr. Anthony Lynn ordered for his sputtering Chargers.

Both teams looked so ugly last week. Falcons a different squad at home.

Is Bruce Arians wondering yet why he bothered coming back to coaching?

Desert should be a relief from rainy Seattle for Seahawks.