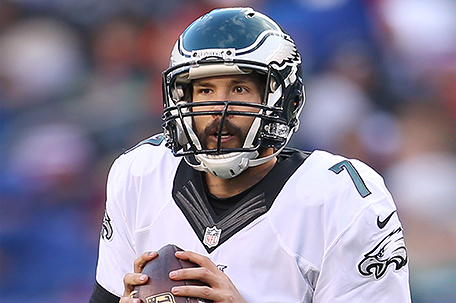 Now that the Philadelphia Eagles have signed Sam Bradford to a two-year deal for $36 million ($26 million guaranteed), they can now concentrate on finding the pieces on the offensive line they need to protect him.

While Bradford himself  is coming off a decent 2015 season, the Eagles offense has to get better in some key areas to keep him on his feet for the full 16-game schedule, something that the former University of Oklahoma star has struggled with throughout  his NFL career.

Since the Eagles want to win now, probably the best way to interpret Bradford’s signing, they need to shore up the offensive line at both the guard and tackle spots.

Last season, Allen Barbre and Matt Tobin were what the Eagles had as offensive guards. The good news is, they were the best two guards the team had. The bad news is, that wasn’t saying much.

According to the website Pro FootballFocus.com, Tobin and Barbre combined to give up nine quarterback sacks, 21 quarterback hits, and 60 hurries.  You give up too many sacks, hits and hurries, you’re not going to have stability in the passing game.

Between the draft and free agency, the Eagles have to find guards that can open holes for the running game and, and this was a radical concept last year, actually protect the quarterback.

Kansas State guard Cody Whitehair (6-4, 301) and LSU’s Vandal Alexander (6-5, 326) are among the top guards out there and they could be available to the Eagles.

Also, although he may be up in age at 32, the Eagles should probably take a look a former New Orleans Saints Pro Bowl guard Jahri Evans. Evans, who played his high school ball at Frankford High School and his college ball at Bloomsburg, is a 6-4, 318-pound guard that’s both solid and experienced, a good run blocker, and, most importantly, can protect your quarterback.

Other free agent possibilities include former San Francisco 49ers guard 28-year-old Alex Boone (6-8, 300) and Kansas City’s Jeff Allen (6-4, 306). Allen is really good prospect among the free agents because of his familiarity with Doug Pederson. He’s just 26-years-old and is definitely better than what the Birds have right now.

The Birds have the 13th pick of the first round and should draft an offensive lineman as their first pick. While they have the most need at the guard spot, the Eagles will probably draft a tackle.

That’s because Pro Bowl offensive tackle Jason Peters is 34-years-old, injury-prone and represents a $9-million salary cap hit, which means the Eagles could cut him this year or  next.

One of possibilities for the Eagles is former Michigan State left tackle Jack Conklin. At 6-7, 315 pounds, Conklin had an outstanding year protecting Spartans quarterback Connor Cook. Some scouts are saying that Conklin might be better suited to play right tackle.

If that’s the case, the Eagles could cut Peterson and move Lane Johnson to the left tackle spot. Meanwhile, some mock drafts are projecting Ohio State’s Taylor Decker (6-7, 315) to be the Eagles No. 1 pick at the 13th spot.  Between Conklin and Taylor, you can’t go wrong at the tackle position.

Since the Eagles have made the decision to keep Bradford, protecting him has to the priority in both the draft and free agency. He’s not the most mobile guy in the world and he doesn’t have the mobility to escape the pass rush to make plays.