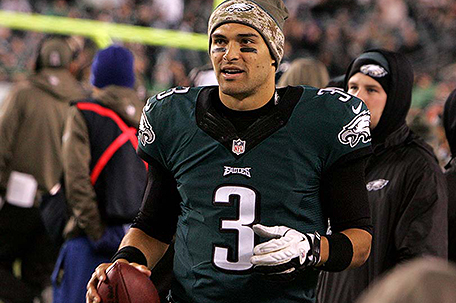 ABOVE PHOTO:  QB Mark Sanchez passed for 370 yards and two touchdowns, but tossed an interception that set up the game-winning field goal for Washington.  (Photo by Webster Riddick.)

LANDOVER, Md.—It’s official. The Philadelphia Eagles season is over thanks to what only can be described as a bad loss to a Washington team that is going nowhere fast.

Kai Forbath’s 26-yard field goal with five seconds left put the Birds postseason hopes in dire straits and they’re going to need a lot of help and lots of luck.

With the Dallas Cowboys beating the Indianapolis Colts on Sunday, the Eagles were officially eliminated from the playoffs.

Three weeks ago, the Eagles were in the playoff driver’s seat and now they’ve lost three straight.

Given how the Birds 27-24 loss to Washington turned out, you could say that the Eagles don’t deserve to be in the playoffs. Teams that make the postseason don’t make the kinds of mistakes the Birds made Saturday night—Two turnovers, two missed field goals and 13 penalties.

“You’re not going to win football game that way,” said Eagles head coach Chip Kelly. “We left them on the field too many times on third down when we got penalties to extend drives. You felt like you had a stop. Thirteen penalties and two turnovers isn’t going to win you games in this league.”

There was a lot in the wreckage of this latest Eagles loss.

Let’s start with the quarterback position. With all due respect to Mark Sanchez, he is not the guy to lead your playoff push. He has 13 turnovers in seven games. Against Washington, the Birds back-up quarterback committed two turnovers—a fumble and a season-killing interception late in the fourth quarter.

The miscues took away from what was a pretty good performance by Sanchez, who completed 37-of-50 passes for 374 yards and two touchdown passes to Riley Cooper. The Eagles rolled up 495 yards of offense. Tight end Zach Ertz had a team-record 15 receptions for 115 yards.

But with the game and the season on the line, Sanchez tossed a Hail Mary that turned into a “Hail No” to set up the game-winning field goal for Washington.

“It’s tough to swallow,” Sanchez said. “You want to get a win, especially with some of the outstanding performances we had. It’s really too bad when that happens and we lose.”

Now to say it was all Sanchez’s fault would be factually incorrect.

Somehow Eagles defensive coordinator Bill Davis didn’t remember the lesson of last Sunday’s loss to the Cowboys when wide receiver Dez Bryant torched cornerback Bradley Fletcher for three touchdowns: Give your cornerback safety help or at least have someone with him in double coverage.

The Birds “old friend” and former teammate DeSean Jackson had a field day and made Fletcher the “Toast” of D.C. He caught four passes for 126 yards including a pair of 50-yard plus passes that led to Washington touchdowns.

Fletcher was actually taken out of the game and replaced by Nolan Carroll at one point.

“(Fletcher) has had two bad weeks in a row. He was hoping to get out of that slump,” Davis said. “He didn’t. They went at him deep and they made the plays on him. I made the switch. … I think Fletch is a good corner, he’s lacking some confidence right now. They’ve been making some plays right on him, he’s in a slump.”

Oddly enough, the Eagles defensive coaches finally figured it out midway through the fourth  when Robert Griffin III went to the D-Jax well one more time on the deep bomb but safety Nate Allen backed up Fletcher and came away with the interception. By then it was too little, too late.

Another sure way to snatch defeat from what should have been the jaws of victory is to commit too many penalties. The Eagles committed 13 penalties for 102 yards.

Some of those penalties prolonged Washington drives on the defensive side of the ball including a roughing the passer penalty on defensive end Vinny Curry that moved Washington deep into the Eagles territory to set up the game-winning field goal.

While there were a couple of questionable roughing the passer calls, there were some penalties had no business committing. Early in the first quarter, cornerback Cary Williams got flagged for shoving Redskins wide receiver Pierre Garcon. It was a stupid penalty that should have been a third down stop.

Then the unthinkable thing happened. The always reliable Cody Parkey missed a pair of easy field goals inside of 40 yards. It was that kind of day for the Eagles.

“That’s the part that sucks because we know how much work we put in,” said Eagles linebacker Brandon Graham. “For us to beat ourselves that’s the worst way to go out.”

Suffice it to say, the City of Brotherly Love will be Colts fans on Sunday.