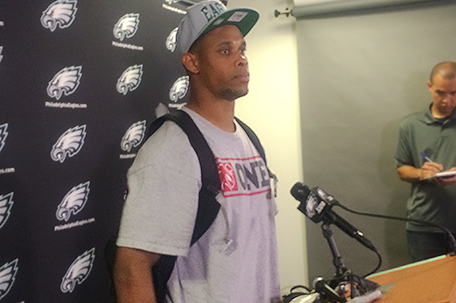 Philadelphia Eagles wide receiver Jordan Matthews came into his first rookie minicamp press conference humble and saying all the right things about the work he has ahead of him.

Considering how some highly-touted college hotshots have come into the NFL with delusions of grandeur and over-hyped bravado, Matthews was definitely a breath of fresh air, especially when he was asked about dealing with the burden of having to replace former Eagles wideout DeSean Jackson.

“I don’t think there’s any pressure,” said Matthews, the Eagles second-round draft pick. “Like I’ve said, I’m a totally different player than DeSean Jackson. I don’t know where any of those comparisons are coming from. He’s a great player and I wish him all the best in Washington. At the same time, I’ve got to best player that I can be … There’s not pressure for a guy when you’ve got LeSean McCoy, Darren Sproles, Riley Cooper, Jeremy Maclin and Nick Foles … I just gotta go in there and do my job.”

But let’s keep it real here. Eagles fans are expecting. or more accurately, hoping Matthews will have a spectacular enough rookie season to replace Jackson’s 82 catches, 1,332 yards and nine touchdowns from last season. There are still more than a few Birds fans that were upset that the team unloaded Jackson without getting anything in return.

Realistically, it may take a season or two to know what the Eagles really have in the 6ft 3 inch, 209-pound Matthews. That said, there’ a lot to like about this kid who seems to have a lot of upside when you look at him on paper and what he did at Vanderbilt.

Matthews is the Southeastern Conference’s all-time leading receiver. During his senior year, Matthews caught 112 passes for 1,477 yard and seven touchdowns. He had five games in which caught 10 or more passes in one of the most physical defensive conferences in the nation.

“I think here saw more man coverage than a lot of other guys. Because I think in that conference, the defensive backs match up,” said Eagles head coach Chip Kelly. “The one thing he does is catch the ball in traffic. He made an unbelievable amount of contested catches. You know, he’s got such a wing span and will go up and get it, and can play both inside and outside.”

I saw Matthews in Vanderbilt’s season-opener against Mississippi and he was lights out in the Commodores 39-35 loss. He caught 10 passes for 178 yards and a touchdown. He runs good routes and has good hands. He runs a 4.46 40-yard dash.

If there is one thing that you can’t measure in Matthew’s college statistics, it’s heart. This was a kid who came out of high school in Madison, Alabama with no major college offers and became the best receiver in the SEC. In fact, the only reason he got a scholarship was because another recruit backed out.

That only served to fuel his motivation during his years at Vanderbilt and why being picked in the second round in the 2014 didn’t faze him.

“I think that edge was already with me coming out of high school. I think that was really the point where that chip really got on my shoulders. It wasn’t like I was being overlooked by some teams, I wasn’t wanted by anybody,” Matthews said. “I ended up where I needed to be.”

Matthews was also successful in the classroom at Vanderbilt.  He graduated with a degree in economics in three and half years.

Oddly enough, Matthews is the third cousin of Pro Football Hall-of-Famer Jerry Rice, who definitely knows something about being a long shot coming from a small school like Mississippi Valley State University. He said he’s learned a lot from the former San Francisco 49ers legend.

“He was definitely influential,” Matthews said. “I think one of the most influential things was watching him as a young child and growing up and being able to study his game and trying to apply some of those things to my game. He has given me some advice and I really appreciate that.”