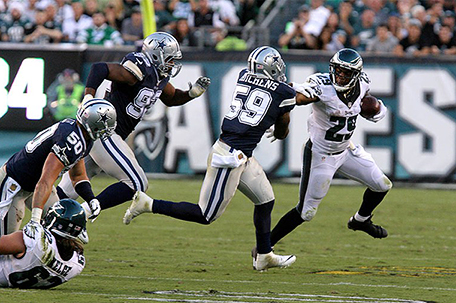 ABOVE PHOTO:  Eagles running back DeMarco Murray gets run down by Cowboys middle linebacker Anthony Hitchens during the Eagles 20-10 loss to Dallas last Sunday at Lincoln Financial Field.  (Photo by Webster Riddick)

The trick for the Philadelphia Eagles as they head to Landover, Maryland for their game against the Washington Redskins is whether or not the lightning of their rejuvenated running game can strike for a second week in a row.

In last week’s game against the New York Jets, Ryan Mathews, filling in for an injured DeMarco Murray, gained 108 yards on 24 carries thanks to an offensive line that actually hit opposing defenders. The Eagles rushed for 123 yards as a unit last week.  While it wasn’t spectacular, it wasn’t bad, and it was definitely better rushing yardage than what they put up against the Dallas Cowboys a couple of weeks ago.

The Birds also got a spark from punt returner/running back Darren Sproles, who returned a punt for 89-yards for a touchdown and had another score on the ground. Sproles had 125 total yards and was named the NFC’s Special Teams Player of the Week.

Given Sproles’ explosiveness and his ability to score every time he touches the ball, you would think that head coach Chip Kelly would employ him more in the offense, especially on third downs.

Speaking of third downs, the Eagles did a poor job of converting third downs in their 24-17 win over the Jets. They were just four-of-14.  Part of that was the fault of quarterback Sam Bradford, who completed 14-of-28 passes for 118 yards and one touchdown.

“The big thing in the last two games, we haven’t converted on third down,” Bradford said. “We have to do a better job of converting on third to get into that rhythm.

Throughout the game, Bradford missed guys who were open and also had receivers drop passes, including one to a wide-open Sproles in the second quarter.

Bradford admits that the offense hasn’t been on the same page. If we’re honest, the Eagles offense has played only two halves of solid football; the second half of the Atlanta Falcons game and first half of last week’s Jets game. The rest of the time, the offense has been far less than sharp.

After last Sunday’s performance, Bradford said in spite of all the offense’s inconsistencies, he believes the offense is close to being the consistent explosive offense it was advertised to be.

“If you look at the tape, we’re having drives in spurts where things have come together, we’ve played the way we’ve wanted to play,” Bradford said during a press conference on Wednesday. “I don’t think it’s a long way off. I think it’s a small correction here or there. I think once we get in rhythm this thing can take off.”

Meanwhile, there is a possibility that Murray will be back in the Eagles lineup on Sunday against Washington. On Wednesday, he participated in practice on a limited basis. That should be a good thing for the Birds offense.

For all the talk of what guys like Murray, Sproles and receiver Jordan Mathews can do with the football, you would think Kelly and the offense would do a better job of really utilizing those guys in the passing game. In some respects, they have. Sproles has 15 receptions while Murray has nine which makes them the second and third leading receivers on the team.

The Eagles wide receivers haven’t been able to stretch the field in the passing game. Matthews, who leads the team in receptions with 22 is only averaging 10.5 yards per catch.

Highly-touted rookie Nelson Agholor, who has four catches for a mere 36 yards, is supposed to be the Eagles deep threat, but he hasn’t found his way just yet. Offensive coordinator Pat Shurmur said the former USC star will eventually come through for the Birds.

“There’s no real easy answer there,” Shurmur said.   “You’ve just got to grind through it.  But he’s doing all the right things.  He can run all day long.  He can be on the field without coming out.  He’s a tough guy.  Catches the ball well and I think he’s just got to keep playing and the production will come his way.”