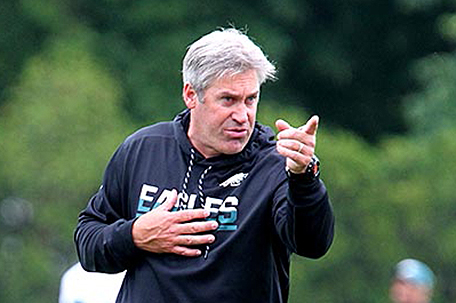 There’s only so much a defense can do to keep their team in the game before the bottom falls out.

For three quarters, the Philadelphia Eagles did everything they could to keep Russell Wilson and the Seattle Seahawks offense from doing a significant amount of damage, especially after the offense turned the ball over. They sacked the elusive Wilson six times and they forced two turnovers.

But for the second straight week, the Eagles offense did nothing to support the defense. They committed five turnovers and couldn’t get into a consistent rhythm. Because of that awful offensive performance, the Seahawks came away with a 17-9 win at Lincoln Financial field and the Eagles would be in a hole they might not be able to climb out of were it not for the Dallas Cowboys loss to the New England Patriots.

The loss dropped the Eagles to 5-6 and has put their season in peril to the point where every game is a must-win from this point forward. The only way that they can make the post season is either by winning the NFC East, which is still possible, or praying that other NFC teams lose.

Perhaps the most sober way of looking at this loss would be to point the absence of players like Alshon Jeffery, Nelson Agholor, and Jordan Howard who missed Sunday’s game because of injuries. But to be honest, the focus is going to be on a quarterback Carson Wentz and justifiably so.

Wentz was responsible for four of the five Eagles turnovers. He threw two interceptions and had two fumbles. He was missing open receivers. The most damaging of those missed opportunities was early in the first quarter on the Birds second possession of the game when Wentz overthrew a wide-open Mile Saunders who had a clear path to the end zone at the Seahawks five-yard line.

The Birds defense did everything but headstands and somersaults to keep Wilson and the Seattle offense from turning the game into complete rout. The defense allowed just three Seahawks points following the turnovers by the Eagles offense and forced a couple of turnovers themselves on the Seahawks ensuing possessions.

“Even though (the offense) was turning the ball over, I thought we did a good job of making those stops,” Eagles safety Malcolm Jenkins said. “At every point in this game, we were in it. We have to start playing complimentary football where we can get all units playing together, I think we can give ourselves a better chance to win.”

The hard part about this loss for Eagles fans is that for two straight weeks the defense has limited two high-powered offenses-the Seahawks and the New England Patriots, led by arguably two of the league’s best quarterbacks to just 17 points. A remarkable achievement dampened by the poor performance of the offense.

In Sunday’s game, the Eagles defense gave up two big plays on defense.  In the first quarter, Wilson hit Malik Turner for a 33-yard touchdown pass that started off as a handoff to running back Chris Carson, followed by a lateral to Wilson and split two Eagle defenders.

Seattle got what turned out to be the winning points on a 58-yard touchdown run by Rashad Penny up the middle of the Eagles defense early in the fourth quarter.

The Eagles only touchdown of the game came on a two-yard touchdown pass from Wentz to Ertz with 22 seconds left in the game. They missed the two-point conversion.

The good news for the Birds is that they will travel to Miami to play the 2-9 Dolphins, a game they should win. That game will be shown on Fox-29 on Sunday, Dec. 1 at 1p.m.