Eagles’ new hire Vinny Curry–will they get more bang for their bucks? 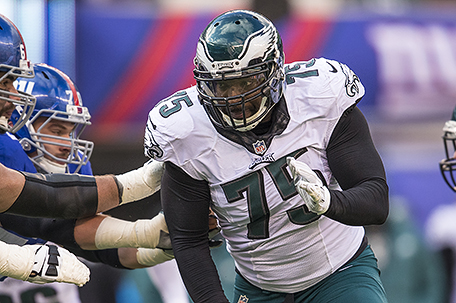 Now that the Philadelphia Eagles are paying defensive end Vinny Curry a boatload of money, fans will get to see this kid play to his full potential.

During his time with the Eagles, we’ve seen Curry’s potential to be a fierce pass rusher. In 2014, he had 9.5 sacks. But last season, playing linebacker in a 3-4 linebacker, Curry saw his playing time reduced and had just 12 tackles and 3.5 sacks.

Curry signed a five-year, $47.25 million contract deal to keep him in Eagles green. With new defensive coordinator Jim Schwartz implementing a 4-3 defensive scheme, it will better utilize his skills as a pass rusher, something that kept the former Marshall star from exploring the free agent market.

“(Schwartz) said he was going to put me in position to do what I love doing and that was just golden for me,” Curry said. “I really can’t see myself playing nowhere else. At the end of the day, man, I bleed green. That’s what it is.”

Playing in the 3-4 alignment that former defensive coordinator used made Curry uncomfortable from a positional standpoint, he said.

“That style of defense (the 4-3) is something I’ve played my whole life playing ball,” Curry said comparing defenses. “It’s almost like getting a point guard and making him a forward. You’re going to get a lot of points, but you don’t box out.”

For the last four years, the debate has been about Curry getting on the field on a regular basis.  With the money that the Eagles have invested in him, it looks like he’s going to get a lot more playing time at the very least, or may even take the field as a starter.

During his press conference, Curry said being a starter has always been the expectation, but nothing is set in stone.

What will likely happen in a 4-3 scheme, Fletcher Cox, defensive end in the 3-4, will move to defensive tackle while Curry and Brandon Graham will move from 3-4 linebackers to defensive end. That will give the Eagles a formidable pass rush.

Howie Roseman, the Eagles executive vice president of football operations, said there was a sense of urgency to sign because Curry wanted to stay here and the coaching staff needed him.

“That comes from the schemes the coaches are running. The coaches want to make sure they have a bunch of pass rushers. Fast balls, as we used to say with Jim (Johnson) and now again with Jim (Schwartz),” Roseman said.  “To be able to have a bunch of guys who can get pressure on the quarterback who are versatile and can rush inside and out is important.”

Roseman also said the Birds re-signed him because they wanted to avoid the aggressiveness of free agent marketplace, which means they didn’t want other teams to make Curry an offer he couldn’t refuse.

Eagles are getting better on defense