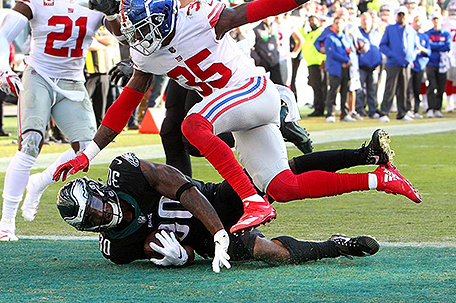 ABOVE PHOTO:  Eagles RB Corey Clement (30) dives into the end zone for a touchdown against the NY Giants.  (Photo: Webster Riddick)

Over the last 40 years of their storied rivalry, the Philadelphia Eagles and the New York Giants often find themselves playing in meaningful games that wind up making or breaking the other team’s season.

From Herman Edwards returning a fumble for a touchdown in 1978’s “Miracle at the Meadowlands” victory to Brian Westbrook’s punt return that jump-started the Eagles 2003 season to DeSean Jackson’s punt return that helped the Eagles complete a miracle comeback from three touchdowns down in 2010, the Eagles have always managed to salvage their season though an improbable win over the Giants.

If the defending Super Bowl champion Eagles (5-6) can somehow get to the postseason in 2018, Sunday’s come from behind victory over the Giants may be mentioned in the same breath with these other Eagles victories.

While the Eagles 25-22 win over the Giants at Lincoln Financial Field November 25 that was decided on a 43-yard field goal by Jake Elliott with 22 seconds left, this game, which brought the team within one game of the Dallas Cowboys (6-5) and the Washington Redskins (6-5) in the NFC East, had more than a few heroes.

Perhaps the most important play for the Eagles came late in the first half when the Giants, leading 19-11, drove the ball to the Eagles 27-yard-line. On second and 10, Eli Manning’s pass to Odell Beckham Jr. was underthrown and intercepted by Eagles safety Malcolm Jenkins with 17 seconds left in the first half.

“Knowing our offense was getting the ball coming out of the half, it was a big jolt,” Jenkins said. “When you look at the game in its totality, them not getting points right there is a big deal. There were a few series that we got stops on defense that ended up being everything that we needed. We needed every single play that we made.”

After the Giants had taken a 19-3 lead on a 51-yard touchdown by rookie running back Saquon Barkley, the Eagles outscored and outplayed New York 22-3 the rest of the way. After giving up 346 total yards to the Giants in the first half, the Eagles defense allowed just 56 yards and just three first downs for the entire second half.

It was a remarkable performance for an Eagles defense that came into the game with an injury-depleted, patchwork secondary that included two new starters at cornerback with very little game experience at the NFL level.

Head coach Doug Pederson credited Jenkins for leading the defense on the field and making a play that was a turning point in the game.

“Malcolm is a great leader,” Pederson said during his postgame press conference. “One of the things that I’ve talked to our leaders on the football team and just challenged them (is) we have to find a way to make plays in big situations. … (Jenkins interception) really sparked the defense going into the second half and then obviously the offense.”

The Eagles was offense was able to get going by utilizing the running game. Undrafted free agent and former Central Bucks South star Josh Adams sparked the Eagles rushing attack by gaining 84 yards on 22 carries. It was Adams’ one-yard touchdown run in the fourth quarter that gave the Eagles their first lead of the game. The Eagles were effective running the ball in between the tackles and the middle of the Giants defense. Corey Clement added 45 yards on five carries.

“We just tried to stay aggressive,” Adams said. “Obviously, it’s not going to be a big hit on every play, but we knew what we’re capable of up front and we wanted to stay aggressive.  The offensive line did a great job and us running backs did a good job of reading their blocks and making it pay off, so a lot of credit goes to the unit as a whole.”

From this point on, the Birds are in must-win mode and they have little margin for error. Including Monday night’s game against the Redskins, the Eagles have three more games against NFC East opponents.

Sunday was just a means to an end.

“We’re not jumping ahead at all,” Clement said. “We took care of (Sunday), we’re 1-0. We got Monday night football coming up next. We just basically started our season today. Staying 1-0, that’s our mindset.”

The Monday Night Football contest between the Eagles and Redskins begins at 8pm on ESPN and 6ABC.