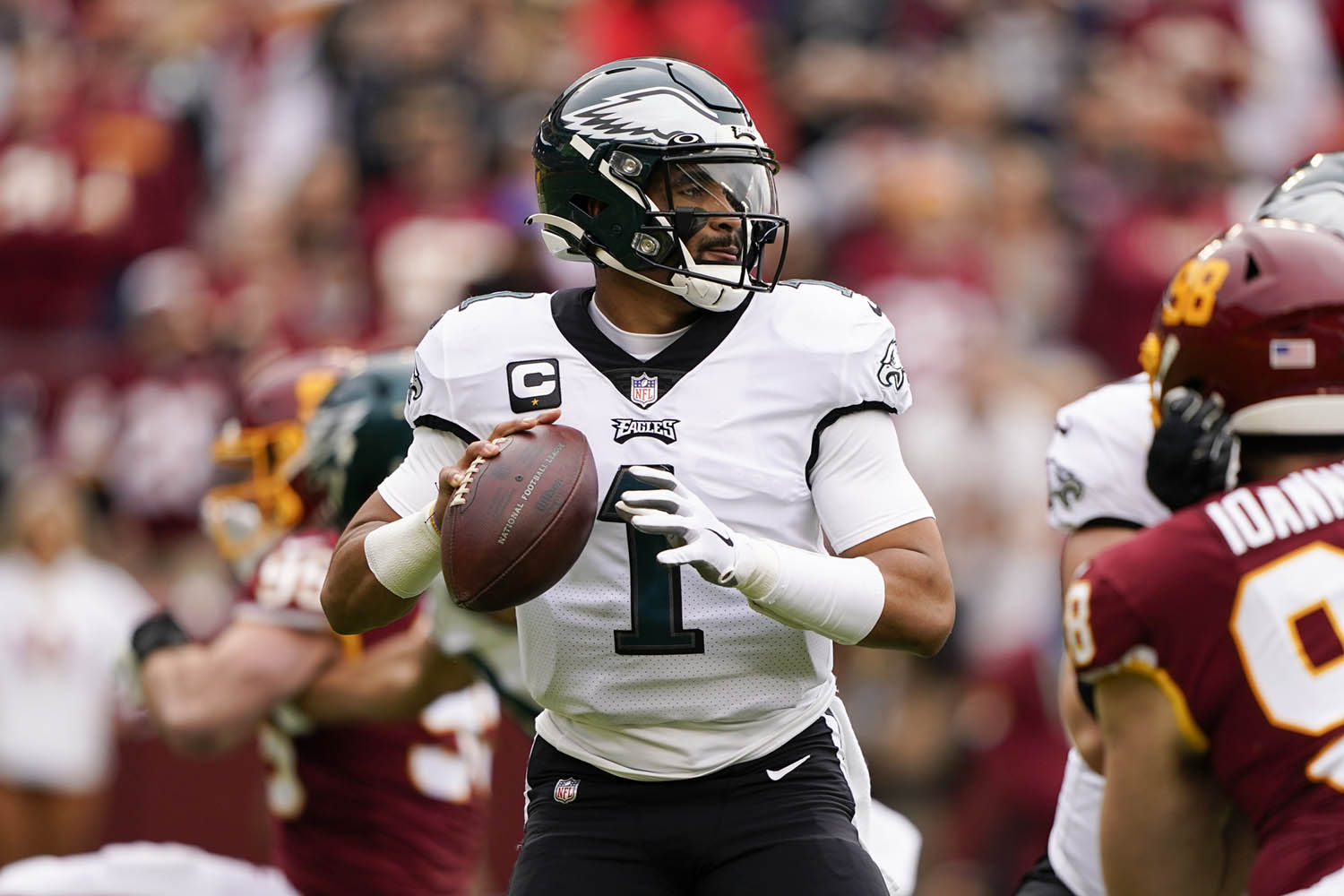 Above photo: Philadelphia Eagles quarterback Jalen Hurts (1) looking doing field to throw the ball against the Washington Football Team during the first half of an NFL football game, Sunday, Jan. 2, 2022, in Landover, Md. (AP Photo/Alex Brandon)

While he’s only in his second year in the National Football League, and about to lead his team into a playoff game for the first time, Philadelphia Eagles quarterback Jalen Hurts is no stranger to the bright lights that will be trained on him during Sunday’s NFL Wildcard Game.

During a press conference earlier this week, Hurts, who will be leading the Eagles against the Super Bowl champion Tampa Bay Buccaneers, had the demeanor of a guy who has his experiences as a quarterback at the Universities of Alabama and Oklahoma to lean on when it comes to big game pressure.

Despite practicing for a Tampa Bay defense that ranks third in the NFL against the run, Hurts and the Eagles see preparation for this week’s game as just another day at the office.

Hurts and the Eagles will be going up against a heavily favored Bucs team that escaped Lincoln Financial with a 28-22 win back in October. The same preparation that helped the Birds win seven out of their last 10 games to make it into the playoffs will lead them to a win on Sunday in Tampa, he said.

The young quarterback’s fundamental approach to the game was echoed by veteran center Jason Kelce, who was named to his fourth All-Pro team this week. While the intensity is higher in the playoffs, it still comes down to doing the little things to win.

“You can’t let the emotion dictate how you’re going to play,” Kelce said. “In the playoffs, it comes down to the minute details because the games are that much closer, and the teams are that much closer. … Even more so in the playoffs, it comes back to the root fundamentals and your techniques. Whoever is in the right mindset to go about things that usually ends up on top.”

The Eagles offense ended the 2021 regular season as the best rushing attack in the NFL, averaging 159.7 yards per game. They will be facing a Buccaneers defense coached by former Temple star and Eagles assistant coach Todd Bowles that yielded just 92 yards on the ground. The Bucs are hoping to bring back linebacker Lavonte David along with linebacker Shaq Barrett and defensive end Jason Pierre-Paul from injuries.

If the Birds running game is stymied by the Tampa defense, the question among more than a few observers is whether Hurts will be able to beat the Bucs with his arm. That has been a point of contention with Eagles fans and those who cover the team.

But Eagles head coach Nick Sirianni said that Hurts has improved as the year has gone on.

“He has definitely gotten better throughout that time, which doesn’t surprise me at all because [QB] Jalen [Hurts] is a student of the game,” he said. “Jalen wants to get better and craves to get better. He has high football character and, like I have said plenty of times, guys that are tough, guys that have high football character and guys who love football are going to reach their ceiling.”

The Eagles got some good news Friday when they announced that running back Miles Sanders, who missed the last four games because of an injured hand will be back in the Birds lineup. The former Penn State star has been the catalyst for the Eagles league-leading ground attack.

Of course, the game will come down to whether the Eagles defense can stop the great Tom Brady and the Bucs offense. At the age of 44, Brady is coming off a 2021 season where he led the NFL in passing yardage (5,316 yards) and touchdown passes with 43.

Even though Brady will not have wide receivers Chris Godwin and Antonio Brown, whose strip tease during the Bucs game against the New York Jets got him released from the team, he will have tight-end Rob Gronkowski and wide receiver Mike Evans, who caught 74 passes during the season, including 14 for touchdowns.

The Buccaneers could also be getting back running back Leonard Fournette, who is coming back from a hamstring injury. During the regular season, Fournette gained 812 yards and averaged 4.5 yards per carry. He also caught 69 passes for 454 yards and two touchdowns.

How the Eagles defense, a squad that barely likes to blitz, is going to attack Brady and the Buccaneers offense will likely determine the outcome perhaps even more so than the offense.

“You see whoever’s out there for them, they all execute at a very high level,” Eagles defensive coordinator Jonathan Gannon. “Their offensive line is very good, they have a lot of continuity with their offensive line. Tom [Brady] is on the same page with all the receivers and the backs. They know how to adjust their routes based off coverage.”

Linebacker T.J. Edwards said the defense has to figure out a way to disrupt Brady. It’s going to take all 11 guys. The last time the two teams met, Brady complete 34-of-42 passes for 297 yards with two touchdowns and one interception.

“It’s going to take a full unit to make sure we’re on the same page in terms of what we’re doing on the back end with coverages and making sure that we’re all connected and taking away those early reads,” Edwards said. We have to do our best to get to those early reads and make him uncomfortable in the pocket

The Philadelphia Eagles and Tampa Bay Buccaneers take the field in Tampa on Sunday. You can see the game on Fox-29 beginning at 1p.m.