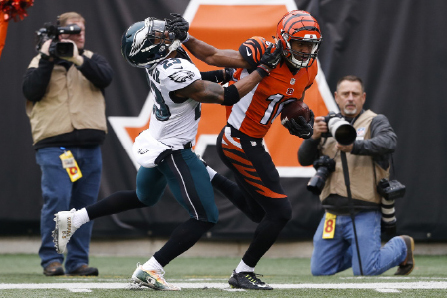 Carson Wentz and the Philadelphia Eagles are going backward.

The rookie quarterback had his worst game in Week 13. So did the defense. The coaches also deserve blame because players were undisciplined and uninspired.

A third straight double-digit loss, 32-14 at Cincinnati, has Philadelphia reeling down the home stretch. After a surprising 3-0 start, the Eagles (5-7) have lost seven of nine.

This was supposed to be a rebuilding year and it’s turned out that way.

However, the Eagles aren’t making progress. They’ve regressed since a promising first month.

The losses are looking worse each week. The Eagles were a play away from winning in their first four losses.

But the past three haven’t been close. The margin of defeat has been 14.3 points per game.

“We’re still on track,’’ coach Doug Pederson said Monday. “Now, do we expect to go out and play like we’ve played the last couple of weeks? No, we don’t. Do we expect to be down 19-0 at halftime? No, we don’t. I know where we are as a football team. We are playing with some young guys on offense. There are some younger guys on defense.’’

Wentz was flawless in September. He didn’t commit a turnover, completed almost 65 percent of his passes and posted a 103.8 passer rating in three games. He tossed a career-high three picks against the Bengals and has thrown six interceptions in the past three games.

“It’s strictly mechanics,’’ Pederson said. “It’s the fact that we have to get him off his back foot and get him stepping into the throws and trusting the decision down the field.’’

The Eagles were missing top receiver Jordan Matthews and top rusher Ryan Mathews against the Bengals, so the offense already was at a disadvantage from the start.

Right tackle Lane Johnson is serving a 10-game suspension and his backup Halapoulivaati Vaitai is injured.

“Obviously we don’t make plays, we have a lot of mistakes, we’ve got to clean up some of our discipline,’’ Wentz said.

The defense has no excuses. It continued a run of disappointing performances despite playing against a team that didn’t have receiver A.J. Green and running back Giovani Bernard. Cincinnati scored on its first six possessions and racked up 412 yards.

Defensive coordinator Jim Schwartz’s unit played so well the first month that many people expected the former Lions head coach would be a hot commodity after this season.

However, the defense has steadily declined and Schwartz is taking heat for it.

The Eagles haven’t had a sack in the past two games, a remarkable stat considering they had 20 in the first six games and they’re supposed to have one of the strongest defensive lines in the league.

“Obviously, we aren’t getting to the quarterback the way we should,’’ said defensive tackle Fletcher Cox, who has no sacks in the past eight games.

“When teams have success of dinking and dunking us, they see the previous teams. It’s a copycat league. Teams are going to that and get rid of the ball quick. When they’re ready to go deep, they seven-man protect. We’re rushing four, so you do the math.’’

The good news for the Eagles is three of their last four games are at home, where they’re 4-1. They’ll host the Redskins (6-5-1) this week.