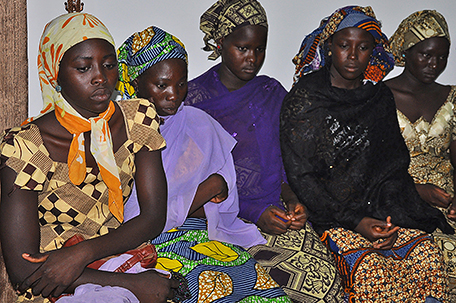 Some of the escaped Kidnapped girls of the government secondary school Chibok, attend a meeting with Borno state governor, Kashim Shettima, in Maiduguri, Nigeria, Monday, June 2, 2014. Nigerian police say they have banned protests in the capital demanding that the government rescues the more than 200 girls still held captive by Boko Haram militants. Altine Daniel, a spokeswoman for Abuja police confirmed the ban in a text message, saying it was “because of security reasons”. (AP Photo/Jossy Ola)