Eagles have huge expectations for Jeremy Maclin in 2014 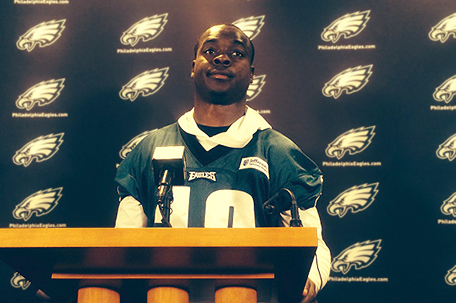 When Eagles wide receiver Jeremy Maclin took the field for the Eagles organized team activities in late May, he ran patterns, participated in the various passing drills and even flopped around the field a few times diving for passes.

“Mac’s back,” said Eagles quarterback Nick Foles. “We’re excited to have him back. He’s doing a great job, he looks really good out there. He’s going to be a big part of this offense.”

For Maclin, doing the normal things that NFL wide receivers do to get ready for the upcoming season is something that he doesn’t take for granted. Last season, Maclin was all set to be a big contributor to head coach Chip Kelly’s fast-paced offense, but an injury to his right anterior-cruciate ligament in his right knee during seven-on-seven drills ended his season.

Going through the first set of preseason workouts, Maclin said he’s not feeling any ill effects from the injury on the field and that his time in rehabilitation has prepared him to be back on the field.

“I’ve been at it for awhile. I’ve been since day one there with the team doing everything that they’re doing and it’s become routine now,” Maclin said. “I think that throughout the rehab process my ability to continue to get better and progressed and every day. That builds confidence and once you get confidence, the rest is just putting in the work.”

In 2013, the Eagles had the NFL’s No.2-ranked offense in total yardage, averaging 417 yards per game with Maclin on the sidelines. The Birds were also 4th in the league in points per game, scoring 27 per game. Nick Foles, who took over as quarterback for the injured Michael Vick, had a breakout year and led the Eagles to their first playoff appearance since 2010.

During the course of the Birds success last year, Maclin could only watch from the sidelines or even in the owner’s box at Lincoln Financial Field while spending many a lonely day rehabbing his injured right knee.

“It was tough with the new era beginning here in Philadelphia and my contract situation that I had. It was tough, but at the same time I was happy to see guys get out there and make plays and watch guys step up and fill that role. I am fortunate and I’m excited to be able to play football again.”

Despite the season-ending injury, the Eagles thought enough of Maclin, who was a free agent at the 2013 season, to sign him to a one-year deal with the possibility of him getting an even better deal if he performs well.

Eagles head coach Chip Kelly said he’s looking forward to seeing what Maclin can do in the offense and is expecting big things from the former Missouri star wideout.

“I was really excited about how he fits in with what we do because of what he can do,” Kelly said. “Losing him early in camp (last season) was disappointing because you only got a taste of him. Having him out there at full speed, he’s doing a great job.”

The last time Jeremy Maclin played a full regular season schedule he caught 69 passes for 857 yards and seven touches. Coming into 2014 season, Maclin said the measure of a good season for him is not his personal stats, but whether the Birds can do even better than last year’s playoff appearance.

“To consider it the best year of my career is to help this team win,” Maclin said. “I want to get further than we did last year. I plan on being a big part of this offense. If we have the success I think we can have and get to where I think we can get to, I think the stats will come, so I’m not going hang my head on certain stats or certain numbers. I’m just going to play football and do what my team asks me to do.”

Of course, Maclin was asked if he felt any added pressure to be the No. 1 receiver with the departure of DeSean Jackson, who is now playing for the Washington Redskins. An unemotional Maclin gave the reporter a very simple answer.