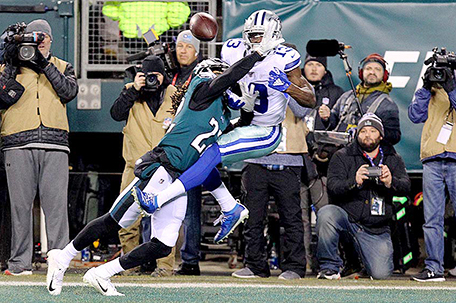 The most potent offense in the NFL was unable to move against an Eagles defense that knew the stakes.

About an hour after his Philadelphia Eagles (8-7) upended the Dallas Cowboys by a score of 17-9 to take a one-game lead in the NFC East, Birds defensive end Brandon Graham was with fans in the basement at Lincoln Financial Field signing autographs and playfully calling out the media as they walked by.

“I know you picked against us!” he said.

Graham had every reason to be feeling a bit giddy because he was part of a huge defensive effort that kept the NFL’s top offense out of the end zone, and if the Eagles defeat the New York Giants in the season finale on Sunday, out of the postseason.

“Nobody gave us a chance,” Graham said. “I was happy because like I said, it’s about us. We just had to keep believing. We have one more left. It isn’t over. I’m just enjoying the win because I knew we had a great week of preparation.”

After the Birds jumped out to a 10-0 lead early in the first quarter thanks to a 32-yard field goal by Jake Elliott and a six-yard touchdown pass from Carson Wentz to Dallas Goedert, they were never really threatened and held the lead for the entire game.

“Hats off the to defense,” head coach Doug Pederson said. “Listen, they took this game personally from the standpoint of what happened to us the first time. To keep [the Cowboys] out of the end zone, hold them to three kicks like they did, stop them on fourth downs, hats off to the defense, [defensive coordinator] Jim Schwartz and his staff for having a great game plan.”

Back in Week 7, the Eagles defense went to Texas Stadium and allowed the Cowboys (7-8) to score 37 points and roll up 402 yards of offense, including a 111-yards from running back Ezekiel Elliott. Graham said they were focused on stopping the former Ohio State star from having the field day he usually has against the Eagles.

Elliott was was held to just 47 yards rushing on 13 carries.

Safety Malcolm Jenkins said the key to keeping Elliott under control in Sunday’s game came down to basic gang tackling and making sure that he didn’t get that big 20 or 30-yard run to flip field position or make a big scoring play.

“I thought our front played phenomenal,” Jenkins said. “Guys tackled well on the perimeter. We got multiple guys involved. It was rare that you had Zeke one-on-one, so you didn’t have Zeke running in the secondary. Whenever you get population to the ball, you can get to him behind the line of scrimmage before he could get going.”

In Sunday’s win, the Birds defense held the Cowboys to just 311 yards of total offense, sacked quarterback Dak Prescott twice and forced him into several bad throws.  The most important statistic of this game was that the Cowboys were an abysmal 3 for 14 on third down.

“The biggest thing was stopping the run on first and second down, so when we got to third down and it was third and longs.” Jenkins said. “They were checking down and guys were tackling well. They tried us down the field a few times and the corners held up well. You take away those big plays and you make them dink and dunk. That’s an advantage to us.”

Perhaps the biggest play of the game, and possibly the entire season, for the Eagles was on the Cowboys first possession of the second quarter. Dallas, starting from their own 25, had driven down to the Eagles 25.  On third and one, the Birds defense stopped Cowboys backup running back Tony Pollard for a one-yard loss.  As Pollard was hitting the ground, Eagles defensive tackle Fletcher Cox forced the ball from Pollard’s grasp and Jenkins recovered the fumble.

Pollard was initially ruled down by contact, but the Eagles challenged the play via instant replay and the call was reversed in the team’s favor.  It was an empty trip for the Cowboys, who were hoping to come away with at least a field goal.

“To be able to get that stop gave us a little bit more breathing room and it allowed our offense to stay patient,” Jenkins said.

After the defense forced a punt on the Cowboys second possession of the second half, the Eagles offense went 10 plays in 80 yards for their final touchdown of the game—a one-yard run by Miles Sanders. The Cowboys added one more field goal but could not get in the end zone.

On their final possession of the game, Dallas drove from their own 12 to the Eagles 19, but the Eagles defense rose up to thwart the final Cowboys effort to get into the end zone. After misfiring a pass to wide receiver  Amari Cooper on first down, Prescott was sacked by Birds defensive end Vinny Curry for a four-yard loss that moved the Cowboys back to the Eagles 19.

On third down, Prescott missed on a pass to Cooper. On fourth down, Prescott’s desperation pass to Michael Gallup was batted away by cornerback Sidney Jones with 1:15 left. The Eagles offense ran out the clock to secure the win.

And if the Eagles manage to go to MetLife Stadium and beat a New York Giants team that will have rookie quarterback Daniel Jones under center instead of veteran Eli Manning, the team will win the NFC East title and host a home game at Lincoln Financial Field.