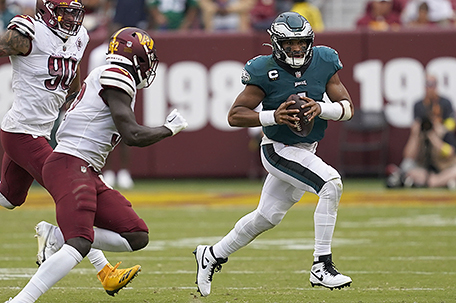 The Philadelphia Eagles gave their fans at FedEx Field something to cheer about at the expense of former quarterback Carson Wentz.

ABOVE PHOTO: Philadelphia Eagles quarterback Jalen Hurts (1) runs with the ball against the Washington Commanders during the second half of an NFL football game, Sunday, Sept. 25, 2022, in Landover, Md. (AP Photo/Alex Brandon)

LANDOVER, Md.—Between the number of Philadelphia Eagles fans hanging out in the parking lot of FedEx Field in Landover, Maryland, and the numerous Eagles chants inside the stadium itself, you would have thought that Sunday’s game against the Washington Commanders was a home game for the Green Gang.

“It was like the Linc today,” Eagles defensive tackle Brandon Graham said. “Every time we come here it seems like it’s like that. We got a lot of Eagles fans. It’s [like] we’re in our backyard.”

And the Birds’ defense definitely made itself at home with a dominant performance against former Eagles quarterback Carson Wentz and the Commanders. While the final score was 24-8, the game wasn’t actually that close.

“In the first half, we were hitting [Wentz] and that’s the number one thing as a D-lineman you just want to him,” said Graham, who had 2.5 sacks and a forced fumble. “Of course, we were getting sacks, too, but those hits add up. We started the way we wanted to start, and it was about making sure that we didn’t let up.”

After watching the Eagles’ defense hound and harass Wentz throughout the first quarter, the offense fed off the defense’s energy and found its groove in the second quarter. The Birds’ offense put up 24 points in the quarter thanks to three touchdown passes by Jalen Hurts in the first half.

“We had two or three drives where we didn’t get any points on offense … the defense kept having our back. That’s what good teams do as they play complementary football,” said Eagles head coach Nick Sirianni. “The defense played good the entire game. I think the offense kicked into it really good in the second quarter and it did some things to bust the game open. To have that confidence that the defense was getting pressure and getting stops, we knew were going to kick ourselves out of it. We got the three, then we got 10 and then it was great from there.”

Quarterback Jalen Hurts had another outstanding effort, completing 22-of-35 passes for 340 yards and three touchdown passes to give the Eagles a 24-0 lead at halftime.

Perhaps the biggest play came on the last play of the first half when Hurts, on fourth down and goal from the two, tossed a jump-ball touchdown pass to wide Devonta Smith.

Although that particular play was not a part of the Eagles’ game plan, it was simply a matter of the players making it work, Smith said.

“I mean, we necessarily didn’t have it in the game-plan, so you just gotta be ready,” said Smith, who caught career-high eight passes for a career-high of 169 yards and one touchdown. “You never know what’s going to come up. I mean everyone was on the same page and I think we executed well.”

Three of Smith’s catches were 30 yards or more and two of them were 40-yard plus catches. Hurts, who played with the 2020 Heisman Trophy winner from Alabama, said he was not surprised at Smith’s performance.

“That’s who he is. He’s a great play, all-around player,” Hurts said. “The Slim Reaper. By the eyes, he may be a little slight, but he plays like a big boy, and he is a grown man.”

For the second straight week, Hurts spread the ball around to eight different receivers. In addition to Smith’s TD passes to end the first half. He also tossed touchdown passes to Dallas Goedert and A.J. Brown, who caught five passes for 85 yards.

“The work we put in the offense is supposed to show in times like this,” Hurts said. “The trust we have in another, being on the same page and to see it pan out now is great. We know there’s more to it and it’s just the beginning.”

On Sunday, October 2, the Eagles have an actual home game with another old friend, Doug Peterson, the coach that brought the team its first Super Bowl, leading the Jacksonville Jaguars into Lincoln Financial Field. You can catch the game on CBS-3, starting at 1 p.m.