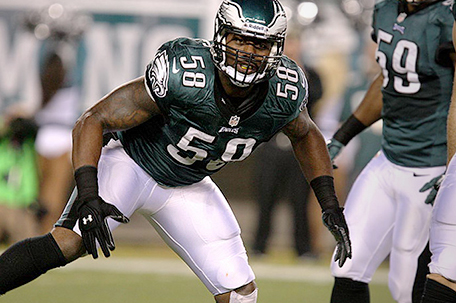 ABOVE PHOTO:  Eagles hope Trent Cole and the defense will be even stronger in 2014. (Photo by Webster Riddick.)

The big noise at the opening of the Eagles 2014 training camp is how fast will Chip Kelly’s offense be in its second year?

How good will the offense be with the addition of running back Darren Sproles? Will Jeremy Maclin and Riley Cooper stretch opposing defenses in the way that DeSean Jackson did last season? Can Nick Foles duplicate his success from last season now that he is firmly established as the Birds starting quarterback?

For all the potential of the Birds high-powered offense, the improvement of the Eagles 3-4 defense is going to be the key to the team’s success in 2014. Considering how the New Orleans Saints rolled up over 400 yards of offense against the Eagles in their NFC Wildcard Playoff game last season, there is definitely room for improvement.

While the Eagles defense played well toward the end of the regular season, they finished the season 29th overall and 32nd against the pass. They were 10th against the run and finished tied for third in takeaways-giveaways margin. The Birds also had 37 sacks as a unit and ranked 20th in the league in that category.

In 10 out of their last 12 games, the Eagles held teams to under 100 yards rushing including the regular-season finale against the Dallas Cowboys, who gained just 56 yards on the ground.

“I “I think the biggest thing you saw a year ago, you saw more assignment football,” said Eagles defensive coordinator Bill Davis. “Guys were studying hard to know their assignment, what was asked of them, and they were trying real hard to get to their assignment and maybe not understanding their whole picture of how they exactly fit with their teammates and how it all came together.”

The one thing that the Eagles, both players and coaches, have been saying throughout organized team activities, minicamps and in the early days of training camp is that they all have a better grasp of the defense in their second year.

“It’s the second year around. …The first year we did a great job,” said inside linebacker Mychal Kendricks. “In the second year, it’s chemistry, camaraderie, checks, plays. It’s all down and so we’re able to focus on the little things. This second year, we should be a whole lot better.”

It helped that the Birds added some players in the secondary. Former Dolphins cornerback Nolan Carroll, who had three interceptions playing for the Miami Dolphins, and former New Orleans Saints safety Malcolm Jenkins will help to shore up an area the Eagles coaches felt was a weakness last season.

The only real position battle on the defense is at the other safety spot between veteran Nate Allen and second-year player Earl Wolfe.

Meanwhile, Davis said the Eagles 2014 No. 1 draft choice linebacker Marcus Smith is still a work in progress in terms of learning the defense. He said Smith, who 14.5 sacks as a senior at Louisville, does have some familiarity with the Eagles scheme because it was similar to what he played in at the collegiate level.

“Marcus is a very hard worker and a very intelligent guy and very athletic,” Davis said. “He’s picked it up fairly quickly and one of the biggest things that attracted us to him was that Louisville and Charlie Strong’s defense was a lot like ours and the way they used him is lot like the way we use our ‘Jack’ position.”

In football lingo, the “Jack” position in a 3-4 defense refers to the outside linebacker serving as the primary pass rusher that can line up on either side of the ball.

For all the flash and dash of the offense, the Birds defense, at this point of the season, doesn’t have an identity in the way that Eagles defenses have had in the past whether you’re talking about the days of Reggie White or the hard-blitzing squads that played for the late Jim Johnson.

“The personality of this group will show itself when we play in the preseason and as we play games on Sunday,” Davis said. “Our goal defensively is to break the rhythm of the offense and to get them off the field as often as possible with turnovers and third downs.”

And so when it comes to the Eagles defense in 2014, fans want to know one thing. …who are these guys?

“Our team is going to come after you and create turnovers,” said defensive end Fletcher Cox. “We’re going to be a hard-nosed defense.”

Eagles are getting better on defense