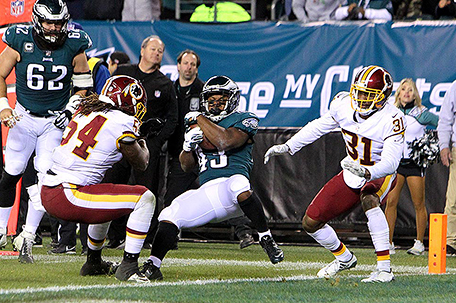 ABOVE PHOTO:  Eagles running back Darren Sproles (43) makes a 14-yard touchdown against the Washington Redskins in Monday’s game in Philadelphia.  (Photo: Webster Riddick)

After struggling through injuries, slow starts and bad performances, the Philadelphia Eagles are finally back in a position to truly defend their Super Bowl title.

With their convincing 28-13 win over an injury-depleted Washington Redskins team on Monday, the Eagles (6-6) moved to within a game of first-place in the NFC East and will have a shot to claim the lead outright when they head down to “Jerry’s World” to take on the Dallas Cowboys this Sunday in Arlington, Texas.

“We’ll see after this week,” said Eagles safety Malcolm Jenkins. “There’s no bigger one than this one coming up. While we’re excited about putting two wins together, if we don’t take care of business this week, it’s all for naught.”

The Birds win over Washington was not necessarily a thing of beauty, especially when you consider that journeyman quarterback and former Eagle Mark Sanchez was pressed into service after starter Colt McCoy left the game with a broken fibula.

But the Eagles will definitely take the win any way they can get it, and are now in a position to jump start their playoff run against a much-improved, but not necessarily imposing Cowboys squad that is coming off an upset of the high-powered New Orleans Saints.

“It’s big for us, especially where we were and now winning two straight and trying to get some momentum going. Doing it against an NFC East opponent is huge and we’re setting ourselves to make a run and to try and do something special,” said Eagles quarterback Carson Wentz, who completed 27-of-39 of his passes for 306 yards with two touchdowns and one interception. “We’re finally starting to click a little bit. We’re extremely excited for next week’s opportunity for sure.

Because they are at the point of their season where there is little margin for error, the Eagles are hoping to build on this current run of success against the Cowboys.

One of things that bodes well for the Eagles coming into Sunday’s game is that they will have the explosive Darren Sproles, who scored on a 14-yard touchdown run on a draw play in the win over Washington.

The Eagles will be taking on a Cowboys team that ranks fifth in total yards allowed per game, fourth against the run and seventh against the pass. The Birds lost to the Cowboys 27-20 at Lincoln Financial Field on Nov. 11.

“They’re getting better,” said Eagles wide receiver Jordan Matthews. “Dallas is a really good team. They’ve got a great defense. That defense is only getting better.”

The key for the Eagles in this game will be their ability to have balance in the offense. Against Washington, the Birds rushed for 130 yards as a group with rookie Josh Adams leading the way with 85 yards on 20 carries.

“Running the football is really our bread and butter,” Wentz said. “I think it gets the boys out front going. It’s gets the defensive line out of pass-rush mode, so that is something that’s big for us.”

Speaking of the running game, the Eagles have to figure out away to stop Ezekiel Elliott from having a big game. The last time the two teams met, Elliott gained 151 yards on 19 carries with one touchdown. Eagles Nigel Bradham believes his team is up to the challenge.

“We’ll see, we’re going to prepare,” Bradham said. “We’re going to come out there and we’ll be ready to play.”