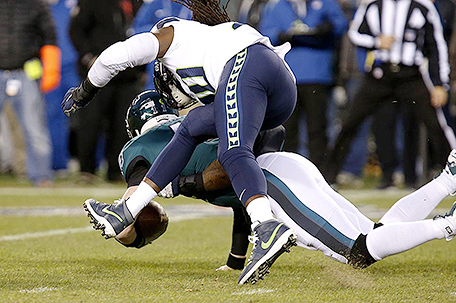 The QB was felled by a controversial helmet to helmet hit.

No one would have blamed the Philadelphia Eagles if they had just given up.

In the first quarter of the team’s NFC Wildcard playoff game against the Seattle Seahawks at Lincoln Financial Field, Eagles starting quarterback Carson Wentz was lost to a concussion brought on by a controversial hit to the head by Seahawks defensive end Jadeveon Clowney.

Forty-year old backup quarterback Josh McCown took the reigns and did his best, keeping the team in the game with four minutes left. But unfortunately, the Birds “next man up” mentality couldn’t help them advance to the next round as Seattle came away with a 17-9 victory to end the Eagles 2019 season. The Seahawks will face the Green Bay Packers at Lambeau Field in Green Bay next Sunday

Playing with a squad made up mostly of backups and players from the practice squad, the Eagles hoped that the grittiness they showed to get into the playoffs in the first place would rule the day.

But sometimes, house money runs out.

“For me, it’s about just how resilient our team is and giving ourselves an opportunity like that to be down one score against a really good football team in a playoff game,” Pederson said after the game. “It’s just remarkable for me to see our guys battle, how the defense kept us in this football game. And the offense moved the ball, we just failed to score. But to still be within a score of at least a two-point conversion to the tie the game shows a lot of character and resiliency of this team.”

In the aftermath of their loss to Seattle, the one positive thing that Eagles players could point to was that they managed to make it to the postseason and win a division title despite a plethora of injuries that would have destroyed most teams.

“When we reflect on what we did over the course of the season, there’s going to be a lot of things we want to change, but a lot of things we don’t regret at all,” safety Malcolm Jenkins said. “It’s a testament to the personnel that they bring in from your stars all the way down to your practice squad players. It goes the culture that we’ve created.  … It’s not accident now that three years in a row that we’ve had to deal with a bunch of injuries and somehow give yourselves a chance to win. That’s a direct reflection of Doug’s leadership and the type of guys they bring in.”

The Eagles problems scoring touchdowns against the Seahawks, problems that showed themselves in a regular season loss, reared their ugly heads again during this game.

Late in the game, the Eagles still had a chance to tie the game with a touchdown and a two-point conversion.  McCown led the Birds to the Seattle 13-yard line with 3:56 left in the game.

But on four straight four plays, the Eagles would come no closer than the Seahawks 10. On fourth and seven, McCown was sacked by Clowney to end the Birds final threat of the game.

Most of the players and coaches were concerned about Wentz, who was playing in the first postseason game of career after season-ending injuries kept from the team’s postseason appearances for the last two seasons.  McCown said he felt for Wentz because of the effort he puts on a daily basis.

“When you’re dealing with these things, it’s tough,”he said. “Carson Wentz has put a ton into this season and to get to this moment, especially the things he’s gone through. It’s a tough call. But he is sitting there and not feeling right and obviously he knew he needed to get checked.”

It was a bittersweet outing for McCown, who was playing in the first playoff game of his 17-year NFL career. He completed 18-of-24 passes for 174 yards and was sacked six times for 14 yards in losses.

Despite the loss, an emotional McCown, who was choking back tears, said he was grateful to be playing in a postseason game after a long career.

“To go out there and get to play in a playoff game was special,” he said. “I can’t thank them enough for their support. It was a heck of a ride. I left it out there, I know that much.”

In terms of the game itself, the Eagles defense simply couldn’t stop Seahawks quarterback Russell Wilson from using his arm or his feet to make plays. Wilson passed for 325 yards including what turned out to be the game-winning 53-yard touchdown pass to rookie wide receiver D.K. Metcalf with 8:45 left in the third quarter. The former Wisconsin quarterback also led his team in rushing with 45 yards on the ground.

Wilson’s mobility as well as his arm enabled Seattle to go 8-for-15 on third down conversions.

With a mountain of injuries to several key starters throughout the 2019 season, Pederson still managed to keep the Eagles afloat with a bunch of guys from the practice squad to the point to where they captured the NFC East title for the second time in two years.

Defensive end Brandon Graham said playing with the adversity of all the injuries and setbacks will only make the team stronger and hungrier for next season.

“Man, we gave everything we had and we’re only going to be stronger than we were this year. We get some guys back, get some chemistry going, people work their butts off this offseason and get some new guys coming in, it’s going to help us for next year,” Graham said. “I’m excited … Just know that I’m going to work my butt off so we won’t have this feeling next year.”

The NFC playoffs continue this weekend when the Seahawks take on the Packers Sunday night at 6:30 pm on Fox 29.