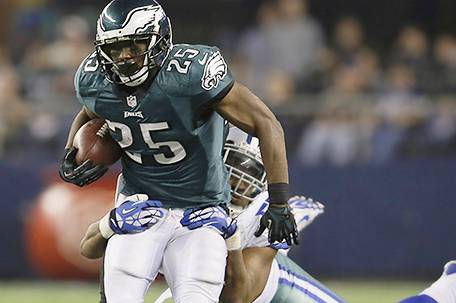 ABOVE PHOTO: Philadelphia Eagles running back LeSean McCoy (25) is tackled by Dallas Cowboys middle linebacker DeVonte Holloman (57) during the second half of an NFL football game, Sunday, Dec. 29, 2013, in Arlington, Texas.

ARLINGTON, Texas — Nick Foles and Philadelphia’s high-scoring offense needed a little help from the defense to make sure it was the same old sad ending for the Dallas Cowboys.

Foles threw two touchdown passes, one to NFL rushing champion LeSean McCoy, and Brandon Boykin had a game-sealing interception to help the Eagles beat the Cowboys 24-22 in a win-or-go-home game for the NFC East title Sunday night.

The Cowboys lost to a division rival with a playoff berth on the line for the third straight year, and nobody can blame Tony Romo for this crushing loss.

Kyle Orton, filling in two days after Romo underwent back surgery, had Dallas about 40 yards from field goal range with 1:49 remaining. But he threw behind Miles Austin on the first play, and into the arms of Boykin.

The Eagles (10-6) will host New Orleans in a wild-card game Saturday night, while the Cowboys (8-8) have now dropped a finale to each division rival the past three seasons and have missed the playoffs four straight years. Dallas is 136-136 since the start of the 1997 season.

‘’It’s unthinkable, really, to me to be sitting here three years in a row and this game ends up putting us at .500 and this game eliminates us from going to the playoffs,’’ Cowboys owner Jerry Jones said.

McCoy, who had a 3-yard scoring catch, rushed for 131 yards to finish with 1,607 yards and become the first Philadelphia running back to win the rushing title since Hall of Famer Steve Van Buren in 1949.

‘’With the stats and the records, none of that stuff means anything, if you don’t win in the end,’’ McCoy said. ‘’That’s the most important thing.’’

The Eagles won the division for the first time since 2010 a year after going 4-12, which led to Andy Reid’s departure and the hiring of Chip Kelly and his fast-paced offense from Oregon.

Dallas trailed 24-16 when Orton threw a 32-yard touchdown pass to Dez Bryant. Orton went back to Bryant for the 2-point conversion, but Cary Williams dove to punch the ball away.

But the Eagles, with the second-ranked offense in the NFL, couldn’t run out the clock against the league’s worst defense. Foles even tried to throw on third down, but had to slide short of the first down when nobody was open.

Boykin took care of things from there.

‘’It definitely wasn’t our best, but some guys came up with some huge plays when we needed them to,’’ said Connor Barwin, who knocked down a fourth-down pass earlier in the fourth quarter.

Romo was the quarterback for losses the past two seasons to the New York Giants and Washington – and against the Eagles in the same scenario in 2008.

The Cowboys were down 10-0 early in the second quarter and never led, but still found a way to make it interesting without Romo and defensive leader Sean Lee, who was out with a sprained neck.

Regardless, Dallas is only the third team in NFL history to finish with three straight 8-8 records, according to STATS. And those are in Jason Garrett’s three full seasons as coach.

‘’You feel a tremendous sense of pride about how the team played, how they fought, how they scratched, how they clawed, how they battled,’’ Garrett said. ‘’But having said that, we didn’t get the job done.’’

Orton, who was 30 of 46 for 358 yards with two touchdowns and two interceptions in his first start in two years, was the first Dallas starter not named Romo in an elimination game since a playoff loss to Carolina with Quincy Carter under center during the 2003 season.

The Cowboys weren’t shy about throwing without Romo.

Trailing by one, Dallas tried to pass on fourth-and-1 from the Philadelphia 40 early in the fourth quarter, and Barwin knocked down Orton’s throw to DeMarco Murray, who was open in the flat.

That decision came after Garrett called a timeout moments before the Eagles would have been called for a false start on fourth down from the Dallas 1. The defense bailed him out by stuffing Foles on a sneak.

After the Cowboys’ failed fourth-down try, Foles led a steady march to Bryce Brown’s 6-yard run for an eight-point lead with 6:09 remaining.