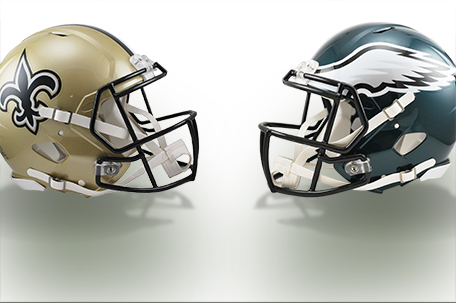 The defending champs are reeling and seem on the verge of receiving a knockout punch.

An embarrassing 48-7 loss to the New Orleans Saints — the most lopsided defeat for a Super Bowl champion — left the Philadelphia Eagles (4-6) one loss from last place. They’re optimistic because they are in control of their fading playoff hopes in a mediocre NFC East. But there’s nothing positive to point at following a dismal loss to the Saints (9-1).

“You can’t hang your head,” coach Doug Pederson said Monday. “If anybody does, and if anybody begins to sort of doubt, you don’t need them. Because we believe, and I believe in those players, I believe in those coaches. It’s a group that is hurting. It’s a group that will pick themselves up this week. They’re not going to feel sorry for themselves and we’ll get ready for the Giants.”

The Redskins (6-4) lead the division but just lost quarterback Alex Smith for the rest of the season. They’ll face the Cowboys (5-5) for first place on Thursday. The Giants (3-7) visit Philadelphia on Sunday. If the Eagles win the last six games, they’ll secure the East. But they look more like a team that can lose out than win six in a row.

Carson Wentz played the worst game of his career in New Orleans, tossing three interceptions with a 31.9 passer rating. The offense managed only one touchdown, went three-and-out six times and continued spiraling downward. It barely resembles the group that outperformed the Patriots 41-33 in the Super Bowl.

Running backs Jay Ajayi (torn ACL) and LeGarrette Blount (left in free agency), wide receiver Torrey Smith (traded to Carolina) and tight ends Trey Burton (left in free agency) and Brent Celek (released) are the skill players missing from that unit, along with Super Bowl MVP Nick Foles, who is Wentz’s backup. Undrafted rookie Josh Adams is the lead running back but the receiver corps was upgraded with the addition of wideout Golden Tate and rookie tight end Dallas Goedert.

Yet, the offense has been out of sync all season. The Eagles have scored more than 24 points only once.

Pederson was bothered more by the offense’s performance against the Saints because Drew Brees and Co. have run through defenses all season.

“We had more plays out on the field that we left, so that’s the disappointing thing, that we didn’t do a better job offensively and score more points,” Pederson said. “The 48, they’re a good football team. Let’s not kid ourselves there. That’s a good football team, and we knew we were going to have to score points.”

The offense’s biggest problem has been slow starts. The Eagles have scored only 21 points in the first quarter, including 14 in one game. Against the Saints, their three first-quarter possession were two three-and-outs and an interception thrown into double coverage.

“We keep preaching. We keep talking. We keep practicing. We put our players in those positions to execute,” Pederson said. “Sometimes I think because there’s been so much made about the way we’ve started games differently than a year ago that sometimes you want to make the play. Players just need to make the plays that come to them and don’t go looking for plays. There’s enough out there that when the play comes, you make it, and it starts with the first play of the game.”