Down Through The Chimney, The Good St. Nick… 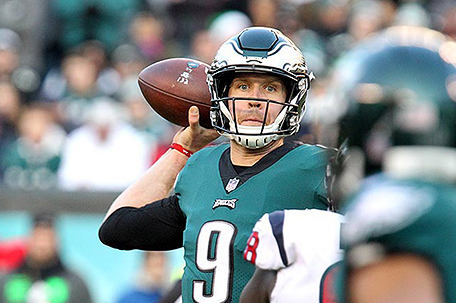 In what’s probably the last down he’ll ever play as a Philadelphia Eagle at Lincoln Financial Field, quarterback Nick Foles brought fans the one Christmas present they wanted: A shot at the playoffs.

But what Foles has done in the last two weeks against a couple of playoff-bound teams that were heavily favored to beat the Eagles will only cement his legend in this city as he looks toward an off-season where free agency looms.

With the Eagles down 30-29 with 2:04 left and starting from their own 11-yard line, the resilient Foles once again put the team on his back and led them on the 11-play, 72-yard scoring drive that led to Jake Elliott’s game-winning 35-yard field goal and a dramatic 32-30 win over the Houston Texans Sunday at Lincoln Financial Field.

“That’s just Nick,” said Eagles head coach Doug Pederson. “He’s always been calm in. …. He’s a guy that just wants to continue to just help the team win and dish the ball and put the ball in our playmakers’ hands.”

Whether or not the Eagles get an opportunity to defend their Super Bowl title will depend on two things: them beating the Washington Redskins and the Minnesota Vikings losing to or tying a Chicago Bears team that’s trying to earn a first-round bye in the playoffs.

But whether the Birds get to the playoffs or not, players and fans will never forget Foles’s gutsy performance against the Texans. He passed for a franchise-record 471 yards and threw four touchdown passes.

But while his numbers were impressive, it was Foles’s toughness that pulled the Birds through after Texans quarterback Deshaun Watson rallied his team from a two-touchdown deficit to take a one-point lead.

The play that symbolized the day for Foles was that vicious hit to his sternum he received from Texans defensive end Jadeveon Clowney.  As Foles was laid out on the ground in agonizing pain, wide receiver Alshon Jeffery hauled in his fallen comrade’s pass for a 19-yard gain that got the Eagles out of a deep hole in their own territory.

“We were like ‘Oh sh—, what happened, what’s going on?,’” said Eagles right guard Brandon Brooks. “He was down for a minute … But seeing him get up and jog off, let me know that he wouldn’t be out too long. Seeing him come back in, fired up and ready to go as if nothing happened was great.”

With Eagles fans and his teammates worried that he would not come back, Foles got up off the mat like a boxer who got knocked down with a big left hook and proceeded to lead his team down field for the winning score.

“Nick’s a warrior,” said Eagles running back Darren Sproles, who caught three passes for 76 yards and one touchdown.  “During the whole last drive. He was calm, relaxed. “He’s just a warrior. (Getting up from the hit by Clowney) got everybody going.”

If you followed the Eagles run to the Super Bowl last season, Foles has had a tendency to come up big when the season was on the line. In these last two games, Foles has been, dare we say, a savior for the Birds postseason fortunes.

Even if the Eagles were to make the playoffs, this might be the last time that you’ll see Foles in an Eagles uniform. Because the Birds have invested their fortunes in the younger Carson Wentz, there is a high probability that Foles won’t be back next season. The Eagles could exercise a $20 million to keep Foles if he is a starter. That wasn’t lost on an emotional Foles.

“This was a special one tonight,” Foles said. “I don’t know what the future holds. I’m not going to worry about it. I’m just going to focus on now and enjoy just being in Philadelphia, enjoy the people, enjoy wearing this jersey because it’s some of the most special moments of my life.”

The Eagles take the field against the Washington Redskins to fight for their playoff lives at 4:25 pm on Sunday and SUN readers can see that game on WTXF-Fox 29.