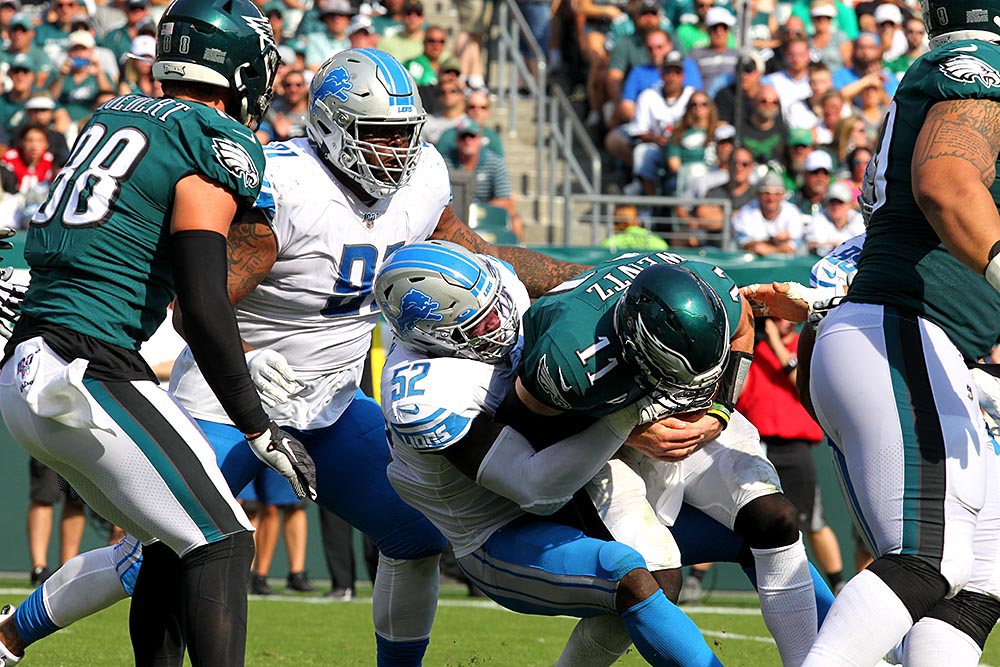 The Philadelphia Eagles go into Thursday’s game with the Green Bay Packers with a 1-2 record because of boneheaded mistakes.

For the third straight week, the Philadelphia Eagles found themselves trailing at the end of the first half and trying to figure out a way to erase that deficit.

And for the second straight week, the Birds failed to do so because they were unable to get out of their own way.

The Birds 27-24 loss to a mediocre Detroit Lions squad was due to a comedy of errors that included turnovers, dropped passes and untimely penalties that created a  deficit from which they could not escape.

Despite being in a double-digit hole at halftime, the Eagles still had a chance to win against the Lions. But…

“It comes down to execution,” tight end Zach Ertz said. “We have spurts of really good football and then spurts of terrible football. A lot of time, it’s self-inflicted. The turnovers and penalties were obviously killers. We just have to play 60 minutes as a team in all three phases.”

Ertz pointed out what has been the Birds biggest problem in the first three games of the season. I don’t care if you have Joe Montana, Roger Staubach, Johnny Unitas or John Elway, you can’t win if you’re constantly coming back from double-digit deficits.

The thing that makes it even worse for the Birds is that they have been in position to win games and have shot themselves in the foot. When you’re playing with that kind of desperation to come back from behind, you’re going to inevitably make some mistakes along the way.

“You know it’s the National Football League and you don’t get multiple chances within each game that kind of make or break the ball game,” said quarterback Carson Wentz. “We had the ball at the end with a chance to win and we came up short.”

The play that symbolized the day for the Birds was the last play of the team’s final possession. On fourth and 15 from the 50-yard-line, rookie wide receiver J.J. Arcega-Whiteside dropped what should have been the game-winning touchdown pass.

“It’s tough,” Arcega-Whiteside said. “It’s the moment you ask for and you gotta make a play. There’s no other assessment other than I have to go get it.”

Of course, there were other reasons that the Eagles came up short. Not having proven playmakers like DeSean Jackson and Alshon Jeffery also hurt the team. At the same time, however, the Birds are supposed to be a team with a “next man-up” mentality.

Since Jackson and Jeffery have been out, guys like Arcega-White and Nelson Agholor have played well, but they have come up short during that one part of the game that could have made the difference in winning the game.

Last week, this week Arcega-Whiteside and last week it was Agholor whizzing past two Atlanta Falcons defenders only to have a catchable pass slip from his grasp. It is especially frustrating to Wentz who has done everything he could to keep his team in the game.

“It’s part of the game,” Wentz said. “Guy are going to drop passes. We’re going to put the ball on the ground. I’m going to throw picks. I make sure I go right up to them and tell them that it’s coming to their way the next time.”

In Sunday’s game, fumbles by Agholor and rookie running back Miles Sanders led to a pair of Detroit Lions field goals that turned a four-point deficit into a 10-point hole at halftime.

One culprit of the Eagles struggles and perhaps the main reason why they have found themselves in early double-digit deficits is that the defense hasn’t been able to get much pressure on opposing quarterbacks.

Against the Lions, the Eagles defensive line did not sack or put much pressure on Matthew Stafford, who did just enough to keep the chains moving and the Birds defense off balance.

The pressure to come back in a game can lead to mistakes. On the Eagles next to last possession, they faced a fourth down and eight at the their own 22 with 2:25 left. With three timeouts left,  the Eagles went for it and came up short.

But Jenkins was flagged for blocking above the waist at the Detroit 40 which moved the ball out of field goal range.  On fourth and five, Darren Sproles caught a pass the Lions 20-yard line, but was flagged on offensive pass interference when he pushed off a Lions defensive back. The next play was Arcega-Whiteside’s drop in the endzone.

“We gotta get it started earlier,” Arcega-Whiteside. “The earlier the better.”

And that was most intelligent quote of the day.

The Eagles have a chance to take Arcega-Whiteside’s advice on Thursday night when they take on the Green Bay Packers at Packers Stadium in Green Bay. Game time is at 8pm on Fox-29.