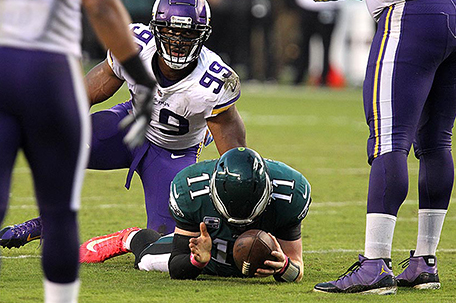 The Philadelphia Eagles offense has been, well, offensive, something that was obvious in Sunday’s loss to the Minnesota Vikings.

In the two games that the Philadelphia Eagles have won this season, the team’s defense came through with crucial fourth-quarter stops to make up for the fact that the offense was inconsistent.

But if we learned nothing else from the three games the Eagles have lost, we’ve learned that the defense’s ability to keep coming to the rescue isn’t going to continue forever.

In the Birds 23-21 loss to the Minnesota Vikings at Lincoln Financial Field, the Eagles offense took too long to get on track and couldn’t quite get out of the way of itself.  Whether it was a penalty or a Red Zone turnover, the Eagles offense always seemed to find a way to do itself in.

“It’s self-inflicted,” Head Coach Doug Pederson said. “We’re shooting ourselves with penalties and turnovers that are hurting our offense. We seem to move to move the ball fine when we’re out in the field. But the red zone, third down are areas that are heightened awareness when we get in the red zone are awareness when we get in the red zone—ball security. All those things we talk about from day in OTAs (organized team activities), we’re not doing.”

When it comes to the third down conversions, the Eagles offense has struggled in that area for the past two games, converting just seven of the team’s last 24 chances. In Sunday’s loss to the Vikings, the team went only two of nine on third down.

Sunday’s game against the Vikings was a microcosm of the Birds penchant for making critical mistakes on offense. They committed two critical turnovers inside Minnesota territory. The first came midway through the second quarter. On first and 10 from the Vikings 31, Minnesota defensive end Stephen Weatherly jarred the ball loose from Eagles quarterback Carson Wentz. Defensive tackle Linval Joseph scooped up the football and took it to the end zone for a 64-yard touchdown return.

Trailing 17-3 early in the third quarter, the Eagles moved the football to the Minnesota six-yard yard and were poised to score the touchdown that would cut the lead to seven. But running back Jay Ajayi fumbled the ball at the five-yard line. Vikings linebacker Eric Kendricks recovered the ball.

The Vikings took just six plays to move from their own five to the Eagles four-yard line to add an additional three points on a 22-yard field goal by kicker Dan Bailey.

After the Eagles cut the Vikings’ lead to 20-14 early in the fourth quarter, Birds linebacker Nigel Bradham recovered a fumble by Minnesota quarterback Kirk Cousins at the Vikings 30-yard line with 10:30 left in the game.

It was a golden opportunity for the Eagles offense to get back in the game and possibly take the lead. But it didn’t happen. The Birds committed two penalties. One came on first down after a six-yard run by Ajayi that moved the ball Vikings 24-yard line. But an illegal formation penalty negated the play.   On second and 10, Wentz was flagged for intentional grounding that moved the ball back to the Minnesota 40 and eventually the Eagles would be forced to punt when they couldn’t convert on third-and-20.

“Its unfortunate. Those are things where we have to take a real hard look in the mirror,” Wentz said after the game. “Little mistakes like that – kind of the same thing that I really echoed last week after the game—these little mistakes that can sometimes get over looked are just killing us. We’re playing like a young, rookie team and we’re not.”

“We’re just tired of beating ourselves and losing to teams we should beat,” said running back Wendell Smallwood.

The good news for the Eagles is that they don’t have too long to get the bad taste of this defeat out of their mouths. On Thursday night, the team heads north to East Rutherford, New Jersey for a Thursday night encounter with their NFC East rival, the 1-4 New York Giants.

Or in other words, the only offense more inconsistent than their own right now.