Dhamir Cosby-Roundtree, The ‘Iron Man’ of the Villanova Wildcats, is grounded 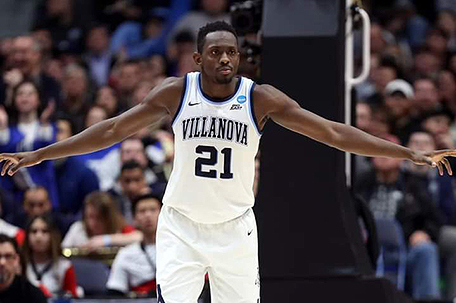 Due to his ongoing leg injuries in his college basketball career, Dhamir Cosby-Roundtree has become Villanova’s top big man coming off the bench. But despite his limited action on the court, the Southwest Philadelphia native is still excited to be on the team. As a matter of fact, the 6-foot-9 forward, the fifth-year senior is known as the team’s ‘Iron Man’ in this year’s NCAA Men’s Basketball Tournament.

Since 2017, Cosby-Roundtree has been a member of the Villanova Wildcats. During that time, he has had four operations on his legs in the past five years. He also had two surgeries on the right tibia and two more surgeries on his left tibia. His leg injuries occurred when he played basketball in high school. But since his recovery, Villanova head coach Jay Wright is happy to still have him on the team.

“He has been doing a lot of little things to help this team,” Wright said. “He helps with the development of the younger guys. He [also] spends a lot of time with them, so every day he will do something, maybe 10 minutes or 15 minutes, on the court.“

There are days when Cosby-Roundtree will help the team in practice, assisting the players during warm-ups and in the layup lines. He always makes sure he feels good enough to do it.

Since the completion of his last surgery, Cosby-Roundtree has been working with team trainer Dan Erickson. So far, the talented big man hasn’t felt any pain in his legs that could prevent him from playing in any games. Cosby-Roundtree’s condition is improving daily. His trainer always makes sure his legs are strong enough to handle the team’s practices and the workload that comes with it. However, doctors couldn’t guarantee if Cosby-Roundtree could play in a significant number of games this season. For that reason, Wright and his coaching staff have been careful about playing him on the court.

Going into this week’s NCAA basketball tournament, Wright hasn’t decided if he will play Cosby-Roundtree in the games. The last time Cosby-Roundtree played in a game was back in November during a preseason contest against LaSalle. In that game, he scored two points and snatched down two rebounds in 6 minutes. If Wright decides to give his star forward some minutes in the NCAA tournament, he will most likely monitor Roundtree’s actions in the games. However, if Cosby-Roundtree doesn’t see any action, the Wildcats will still benefit from his leadership and presence on the bench. He will help push the players and keep them motivated on the court.

Cosby-Roundtree’s most memorable game was in his freshman year when Villanova made its championship run in 2018. He played a pivotal role in the 2018 East Regional Finals when he stepped off the bench. He scored four points and grabbed seven rebounds against Texas Tech. In the final minutes, he helped lead Villanova to a 71-59 victory. His brilliant performance helped lead the Wildcats to the NCAA Final Four. Before the Wildcats advanced to the NCAA championship game, Cosby-Roundtree jumped off the bench and scored 10 points, and made three block shots against Radford. His action on the court earned him a spot in the team’s rotation as a front-court reserve big man.

Working towards a master’s degree in education and counseling, Cosby-Roundtree is still working off his current scholarship. He was also granted an extra year of eligibility in the wake of the pandemic. He said being back on the team for the fifth-straight season has been a blessing forhim.  Even though he hasn’t been able to help his team in their current run in the NCAA tournament, he still feels happy being around his Villanova teammates.

Going into Thursday’s night Sweet 16 game against Michigan, there was a great chance that Cosby-Roundtree would be seen on national TV. This would allow the former Neumann Goretti basketball star to entertain his Philadelphia basketball fans and provide flashbacks of his high school days when he led Neumann Goretti to a PIAA state title. That season, Cosby-Roundtree averaged 15.9 points per game, 11.5 rebounds and 3.5 block shots. He was a proven high school basketball star while being nationally ranked by the national scouting services.

With a victory over Michigan, the Villanova Wildcats could move closer to another appearance in the NCAA championship game. Villanova could have another shot to win another NCAA national title. For Cosby-Roundtree, this could be a dream come true. It could bring a perfect ending to his five-year college basketball career.