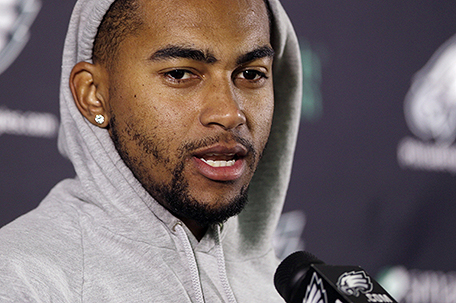 For all the talk during this free agency signing period about the Philadelphia Eagles wanting to maintain their chemistry, the question to be asked when it comes to team’s shopping of wide receiver DeSean Jackson is, can there be addition by subtraction?

According to media reports, the Eagles are shopping wide receiver DeSean Jackson, who wants to renegotiate his five-year, $48-million contract. The former Cal star said last January that he was deserving of a new deal.

You remember the last hotshot Eagles wide receiver who wanted to renegotiate his contract, right? It was some guy named Terrell Owens and we all know what happened with that. Not only did the Eagles not budge in that situation, but they also eventually showed Owens, and his agent Drew Rosenhaus, the door. Maybe Jackson should talk to him about that one…

But that said Jackson is coming off a career year where he caught 82 passes for 1,332 yards and nine touchdowns. He fit Chip Kelly’s offense quite well, especially in the vertical passing game.

But one thing that you have to understand about the NFL is that every player, even the superstars, is expendable if you can find a good deal.  General managers like the Eagles’ Howie Roseman will tell you is that his office gets calls about players all the time.

As good as Jackson has been over the years with the Eagles, he is not above being replaced. No one is going to confuse him with Megatron (the Detroit Lions’ Calvin Johnson), or is going to mention him in the same breath as the Larry Fitzgeralds, and Andre Johnsons of the world. Jackson is not the best route runner in the world and struggles at times against press coverage.

In fact, in the Eagles’ playoff game against the New Orleans Saints, Jackson was held in check by Saints cornerback Keenan Lewis before he left the game with an injury. Jackson caught just three passes for 53 yards.

But at the same time, if you’re going to get rid of Jackson, you’d better get somebody who is ready to start at wide receiver right now either through free agency or the draft.

The current free agent pool is slim at wide receiver right now. The most notable guy out there now is Dallas Cowboys free agent Miles Austin, who was battling injuries all last season and hasn’t really lived up to the promise of a few years back.

The best wide receiver in the draft is Clemson star Sammy Watkins, who is projected to be a high first-round pick.  If you’re going to unload Jackson, you might want to make a deal to be able to draft Watkins, who caught 101 passes last season and had a monster 16-catch effort against Ohio State in the Orange Bowl.

Another possibility is Texas A&M wideout Mike Evans. The six-foot-five, 223-pound receiver runs a 4.5 40-yard dash and has the potential with his size and hands to be a nightmare for opposing defenses in red-zone situations. He caught 65 passes for 1,322 yards and 12 touchdowns.

But you know what? It ain’t gonna happen.

According to most reports that I’ve seen, Jackson’s $10.5 million annual salary is the thing that’s making teams a little squeamish about pulling the trigger on a trade for the 27-year-old wide receiver. The New England Patriots and the San Francisco have reportedly made calls, but nothing really serious.

So Jackson’s probably to stay put for the time being.

The Eagles have to hope that Jackson’s grumbling over his contract doesn’t escalate to the point to where he’s a distraction. Trading him only makes sense if you’re going to get something of equal or greater value. Since no one in the league is trying to do that…

If I were advising him, I would tell Jackson to chill and concentrate on improving upon last season and then seeing what can be worked out.  More importantly, I’d advise him to avoid trying to “negotiate” with the Eagles in the media by griping about it constantly….