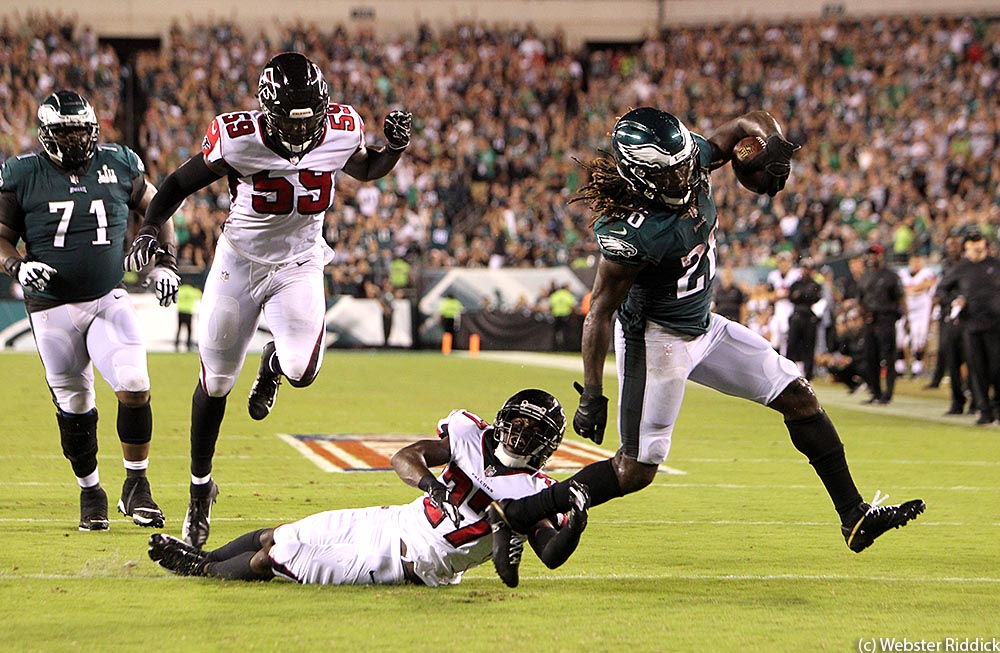 The Philadelphia Eagles win over the Atlanta Falcons had a familiar feel to it.

If you walked in at the end of the Philadelphia Eagles 18-12 season-opening win over the Atlanta Falcons, you probably thought you were watching a rerun of last season’s NFC Divisional playoff on the NFL Network.

The only difference this time was that the incomplete pass was the result of Jones being tackled out of bounds following an illegal contact penalty on fourth down that put the ball on the Eagles five-yard line with just one second left.

In what was a frightfully-flawed football game on the part of both teams, it was the Eagles defense that set the tone for the game. Atlanta had the ball five inside the Eagles red zone five times including three times inside the 10-yard line and came away with just nine points.

“It’s probably, the deciding factor,” Eagles head coach Doug Pederson said. “Defense, again. They got down there and bowed their neck and made several big stops for us. That’s what it takes, I think, early in the season like this until your offense gets on track and gets going a little bit.”

“That was big,” Eagles safety Malcolm Jenkins said. “For them (Falcons), they needed to come here and establish some dominance. For us to stand up and for them to come away with no points. When you look at this game in its entirety, that was a huge play for us. That ended up changing the momentum on our side that we carried throughout the game.”

At various times during the game, the Eagles offense was sluggish and inconsistent at times. The team managed just 232 yards of total offense. Quarterback Nick Foles still hasn’t found much of a rhythm in the passing game, especially with Alshon Jeffery not in the lineup. He completed 19-of-34 passes for 117 yards with one interception.

Foles only big play of the night came in the quarter when Pederson called, “The Philly Special”, now known as “Philly-Philly.” He handed the ball off to Corey Clement who handed it to wide receiver Nelson Agholor who passed it to a wide open Foles for a 15-yard game.

It was the Birds running game that got offense on track in the second half thanks to running back Jay Ajayi. After getting just three carries in the first half, Pederson increased Ajayi’s workload in the second half. For the game, Ajayi gained 62 yards on 15 carries with two touchdowns including the eventual game-winner and one two-point conversion.

“In the second half, we made some adjustments at halftime and I made a conscious effort just to keep him in there on some of those runs, Pederson said. “And (Ajayi) was running really hard and obviously the touchdown late and the two-point conversion were evident. We just leaned on him more a little bit more in the second half.”

With the Birds leaning on Ajayi a little bit more in the second half, they were able to establish a good sense of rhythm and balance on offense.

“A little bit early in the game we were stalling on the run,” Ajayi said. “So it was kind of keeping us behind the chains a little bit, but once we were able to get rolling, get first downs, create a little juice and make big plays, it kind of helped out Nick and the guys to create plays on the outside”

The Eagles head to Tampa Bay next week to take on the Buccaneers at Raymond James Stadium.